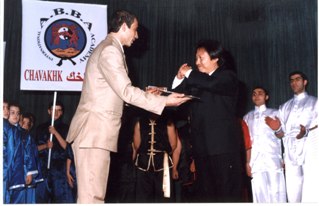 Azad-Hye, , 11 February 2006: Under the patronage of Archbishop Shahan Sarkissian, ABBA's annual certificate awarding ceremony was held on 29 January 2006 in “Avedis Aharonian” Hall in .

Tamar Bjakjian and Nora Der Sarkissian delivered welcome speeches, mentioning the role of ABBA in the community, especially within the ranks of the young generation.

Soon afterwards, ABBA athletes appeared on stage chanting the International ABBA anthem (lyrics by Avo Katerjian, music by Raffi Abedjian). This was followed by several Kung Fu Wushu exercises and movements that grabbed the attention of the audience.

After a broad presentation, Mr. Avo Katerjian thanked Archbishop Sarkissian for his presence and invited him to deliver his heartening words to the athletes of the Academy.

Coach George Durnaian handed the Archbishop a symbolic sword, referring to the bravery and martial arts skillfulness of the athletes. He also expressed his gratitude to Avo Katerjian, member of the founding board, for his continuous efforts in directing and managing the public relations and educational programs of the Academy and especially for writing the lyrics of the anthem. Additionally, a certificate by Grand Master Dr. Garo Kebabjian was handed to him.

From his side, Durnaian gave a commemorative present to Chen as a token of commemoration and honor.

168 athletes received various certifications, among them the first graduates of the Academy, who already completed a 6 year course this year. The efforts of the coaches George Khourie, Mosig Doshoglanlian and Baghdig Sarkissian were highlighted.

At the end of the ceremony, Archbishop Sarkissian addressed the attendants wishing them success. He expressed his happiness for being amongst them and congratulated the athletes and the directors for what they have achieved.

The parents left the ceremony satisfied with the physical and moral education their children were receiving.