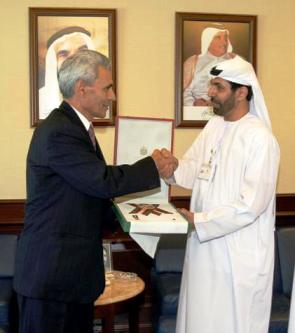 Azad-Hye, Dubai, 12 February 2006: On 11 February 2006 the President of the United Arab Emirates Sheikh Khalifa bin Zayed Al Nahyan has awarded the ?Independence Order? to outgoing Armenian Ambassador Dr. Arshak Poladian, in appreciation of his efforts made during his tenure to strengthen and expand the ties between Armenia and the UAE.

The Order is the third highest in the UAE and is given only to envoys of foreign countries. Abdullah Bin Rashid Al Nuaimi, the Foreign Ministry's Under Secretary decorated the Ambassador during a special ceremony held in the Ministry, wishing him success in his future assignments.

Al Nuaimi praised the political and scientific endeavors of Ambassador Poladian, pointing out that the Order is bestowed on the representative of a country, which has only recently established relations with the UAE, a fact that reflects the magnitude of the progress in the bilateral relations.???

Earlier on the same day, the Ministry of Foreign Affairs held reception in the ?Abu Dhabi Officers? Club? to bid farewell to Ambassador Poladian (and his Russian and Bahraini colleagues).?

The reception was attended by a number of Ambassadors and officials in the country (including Foreign Ministry?s Under Secretary Abdullah Bin Rashid Al Nuaimi, Director of Foreign Ministry?s Protocol Department Obeid Al Zaabi, President?s Legal and Religious Advisor Sheikh Ali Al Hashimi and others). Dignitaries from the Armenian community and members of the Embassy?s staff were also present. 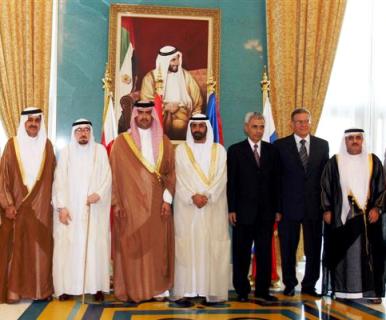 Serving as Charge d'Affaires (2000-2002), Poladian was promoted in August 2002 to the rank of Ambassador Extraordinary and Plenipotentiary, following the visit of President Kocharian to the UAE. He was appointed also as non-resident Ambassador to and .

During his term in he published three works (mainly of informative nature):? “Studies in the History and Culture of the East” (2001), “History of Arab-Armenian Relations” (2002) and “Islam: Religion & State” (2003), besides his contribution in preparing a booklet on the occasion of the Armenian Cultural Week in Sharjah (December 2004).

Poladian is planning to stay in the until the first week of March 2006. He will be replaced by Vahagn Melikian (born 1967), graduate of oriental studies, presently Head of the Protocol Department in the Armenian Foreign Ministry, son of the well known Professor Gourgen Melikian, Dean of the Faculty of the Oriental Languages at the Yerevan State University.

1) Poladian receives the “Independence Order” from Foreign Ministry's Under Secretary Abdulla Bin Rashid Al Nuaimi, on behalf of the President of the UAE.

2) Farewell party to Ambassador Poladian (third from right) and his colleagues.