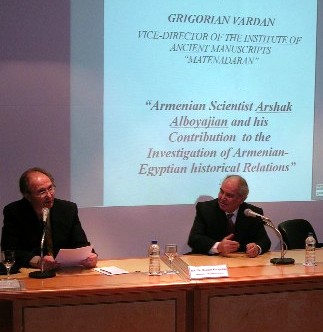 Azad-Hye, , 15 February 2006: On the occasion of the 1600th anniversary of the creation of the Armenian Alphabet, the Bibliotheca Alexandrina in the Mediterranean coastal city of , , in collaboration with the Armenian Embassy in , has organized an exhibition of original and facsimile copies of medieval Armenian manuscripts and miniatures from the Matenadaran Institute of Manuscripts in

The exhibition opened on 7 February 2006 in one of the biggest halls of the famous Library.

The opening ceremony was attended by Taher Khalifa, the executive director of the Library and Ruben Karapetian, 's Ambassador to . The exhibition will be on display up to 25 February 2006. 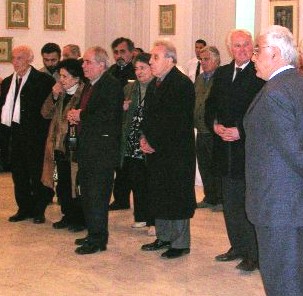 Earlier on the same day Sen Arevshatian, Matenadaran's director and Taher Khalifa signed a cooperation agreement between the two establishments. As a symbol of cooperation Matenadaran presented 11 facsimile copies of Armenian manuscripts and miniatures to the Library.

On 9 February 2006 the auditorium hall of the Bibliotheca Alexandrina hosted a conference titled “Armenian-Egyptian historical and cultural contacts“, with the participation of researchers from both countries.