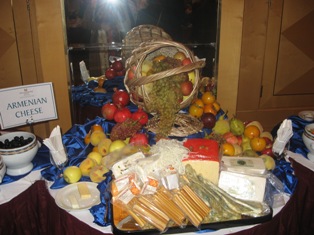 Azad-Hye special
?
Last week, starting from October the 20th the United Arab Emirates experienced the entire beauty of Armenia.
?
Taking into consideration the feedback and appraisals of various public circles, as well as media coverage, we can assert that the cultural extravaganza week (named ?Taste of Armenia?) was an unprecedented event.
?
A large group of 45 professional and highly acclaimed performers and artists conveyed the cultural and historical heritage and the spirit of our country to the UAE nationals and expatriates living here.
?
For three days people enjoyed listening to jazz with ethnic rhythms. The jazz band ?Time Report? was very successful in performing Armenian jazz,?a really new unique experience in this country. After every impressive performance people were singing in Armenian melodies.?
?
The first day of the festivities took place at the Ras Al Khaimah?s Cultural Centre with a concert by prominent singers Aramo and Emma Petrosian, Arman Hovhannisian,? violinists Hakob Shirinian and Avetik Gevorgian. One of the topmost dance troupes of Armenia ?Barekamutyun? (Friendship), performed a mixture of traditional Armenian and contemporary pieces. The attendants were fascinated by the mixture of colors and the riches of the Armenian culture.
? 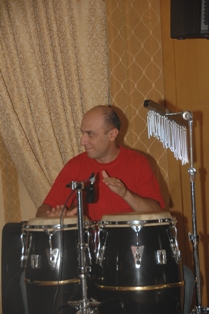 In Abu Dhabi, the celebrations started on October 21st, at the Grand Ballroom of the Millennium Hotel, with the official reception hosted by the Armenian Embassy on the occasion of the 16th Anniversary of the Independence of the Republic of Armenia. Violinist Hakob Shirinian surprised the attendants with a variety of Armenian, classical and international melodies.
?
Throughout the week, Armenian painter Zara Gasparian exhibited several items of her work at the Millennium Hotel. Being a member of Professional Painters of UNESCO and the Artists? Union in Armenia, her modern style paintings depict mythical and imaginary settings, pleasant for every eye.
?
Armenian food evenings at the Marakesh restaurant (Millennium Hotel) along with songs, dances and traditional dishes were also part of the celebrations. Most of the cold serving, as well as the famous Armenian brandy and wine were brought from the homeland.
?
At the Cristal Bar four Armenian jazz evenings were organized with the highly acclaimed performance of ?Time Report? jazz-folk band. It came as a nice surprise for the followers to notice that it is possible to play various jazz-folk interpretations on the traditional Armenian flutes: duduk and zourna.?
?
As part of the cultural week, the Abu Dhabi Authority for Culture and Heritage hosted a 2 hour concert evening at the Cultural Foundation with the participation of the entire group of performers.
?
This wonderful Cultural Extravaganza Week was concluded with a Gala Dinner hosted bt the Armenian Embassy at the Grand Ballroom of the Millennium Hotel Abu Dhabi. It was another good chance for the participants to enjoy the Taste of Armenia, with a set buffet and also an unforgettable performance.
Additional photos:
?