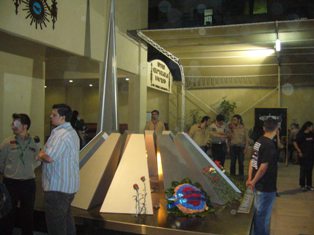 In the hall of the Armenian Prelacy in Salmiya and in front of a miniature of the martyrs? monument who fell in the genocide committed by Turkish Union and Progress Party, members of the Armenian community in Kuwait placed flowers and remembered with a moment of silence, mourning, prayers and national songs the memory of the horrible Genocide which caused the life of 1,5 million Armenians in 1915.

On the evening of Tuesday, 24 April 2007, the Armenians in Kuwait remembered this event, which is symbolically commemorated on 24th April, the day the Turkish Union and Progress Party took the life of the best writers, physicians, lawyers, thinkers etc of the Armenian community, continuing its suppressive policy which caused the death of 1,5 million men and women including children and unarmed youth.

The Armenians of Kuwait, who gathered on this occasion, confirmed that the Armenian people did not give up; on the contrary, new generations emerged from the dead and the sacred bodies of the victims and with the help of the Arab brothers, who protected the survivors and provided them with safe haven, managed to stand up again on their feet, with an even stronger determination to move forward and participate in the development and public life of the countries where they settled. They managed also to regain freedom for their motherland , nowadays an independent and sovereign country and a member of the United Nations.

The youth of the community staged a theatrical piece, based on facts related to that era. Speeches were delivered, asking the audience not to consider the gathering as a sad and painful occasion, rather than an opportunity to revive and look into the future with optimism, without forgetting what happened in the past, and to demand to recognize the Genocide and accept its responsibility.

The participants attended also an exhibition of photographs and documents in the yard of the Prelacy and vowed their martyrs to continue the struggle with strong and unbending determination and with a firm belief in the justice of their cause.

END OF ARTICLE BY AL QABAS

Article in “Al Qabas” (in Arabic):

PDF format (the page as appeared in the newspaper)