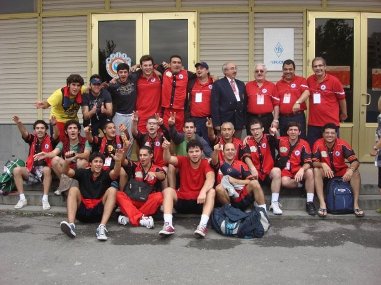 The Armeno-Egyptian basketball selection is now set for the 2011 Pan-Armenian Games in Yerevan. Egypt will be present only in the basketball tournament of the games through its Cairo team, The selection will be formed of: Apraham Tahtabourian, Aram Apikian, Ari Yerzengatsian, Armen Varjabedian, Edouard Michel, Garo Varjabedian, Hagop Mazloumian, Hrastan Kalenian, Kegham Terzibashian, Khatchig Avedanian, Norair Mekhtigian, Tony Michel & Varoujan Kazandjian,. The team coach is George Torossian and the team administrator Garen Touloumbadjian. Noubar Simonian is the head of delegation.

In the 2009 tournament, our ?Cairo? team was able to occupy the 6th position out of 16 participating teams, winning 4 of its 6 matches which were played against some very strong teams, and this in a time span of only 7 days. In the group stage, the Cairo team had occupied the top spot of the group after 3 wins against Aleppo 75/64, Isfahan 71/55 and Moscow 71/61. In the final stages our selection went down only to Sochi 77/95, and Istanbul 68/88 after a deserved win against Gyumri 69/62. A gallant performance indeed..

The 2011 Pan-Armenian Games which will be held from 13 to 21 August later this summer, includes football, futsal, basketball, volleyball, table tennis, tennis, athletics, swimming, badminton and chess. Applications for participation in the Games can still be accepted until 15th July 2011. It is to be noted that this year the Armenian government has allocated 80 million AMD for the games organization.

This year the travel and accommodation expenses of the delegation will be fully assumed by the Armenian Apostolic Patriarchate of Cairo.

Best of luck to our team..

Newer PostArmenians in Mumbai: A 200-year history
Older PostVoting for a Palestinian state