Azad-Hye, , 18 February 2006: In October 2005 a new addition enriched the library of the Genocide memoirs and chronicles. Tamar Topjian Der-Ohannessian, the Principle of the Abu Dhabi Armenian Community?s weekly school and a long time resident in the , published a translation of a manuscript left behind as a family treasure by her grandfather Bedros Der Bedrossian (1884-1980), titled ?Autobiography and Recollections?.

Below is the story behind the book, written by Tamar Der-Ohannessian specially to the readers of our website.???

My maternal grandfather, Bedros Der Bedrossian was a survivor of the Genocide perpetrated by the Ottoman government against its Armenian subjects during the First World War.?After many trials and tribulations he finally ended up in , where he married his fianc?e, Noyemzar, also a survivor of the Genocide, and started a family.?They had five daughters who eventually moved to and from there to the where they all live now, with their respective families and extended families.?In 1972 Bedros and Noyemzar finally moved to the states to be with their family.

During all those years, they rarely spoke of the suffering and sorrow they endured.?As their grandchildren, we never heard them tell us stories of the atrocities they had experienced and witnessed.?

After settling in , with their third daughter and her family, Bedros started writing his memoirs just to keep himself occupied.?He never thought anyone would read it, let alone have it in print.?Despite his advanced age, he has told his story with a very logical sequence of events.?He also managed to finish his story before passing away in 1980 at the age of 96.

But the manuscript stayed in a drawer at my aunt?s house for many years.? We all wanted to read it some day, but it was just one copy and too precious to pass around.?Also an old man?s handwriting was not very easy to read.? Eventually, five Xerox copies were made; one for each daughter.?

During the mid-nineteen eighties, computers were not very common, and Armenian fonts were virtually non-existent.?But, I managed to obtain a Multiscribe version of the Armenian fonts and started typing the memoirs on our Apple II GS computer (the one you had to boot every time you wanted to use it).?After many months of painstaking labor, a typed version of the manuscript was ready.?All of a sudden there was great interest in the book, which was Xeroxed by the dozen and given to whoever showed interest and wanted to have a copy, be it members of the family, friends, Ourfatzi compatriots, as well as institutes such as the Zoryan Institute and other such establishments. 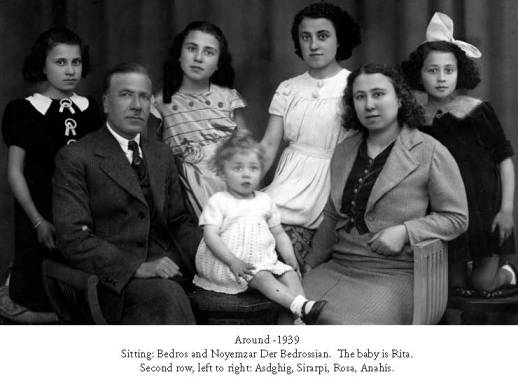 Still, the new generation in the family, the great-grand children, did not read it, because reading in Armenian was not very easy for them.?They all meant to read it some day?

During a family reunion in December 1998 the subject of translating it came up.?That was when I decided it would be a worthwhile effort to translate the memoirs to English, so that it would be accessible to everyone.?It was finally completed in November 2004.?My cousin, Dr. Vahan Janjigian, offered to edit it and the final version was ready in October 2005.?The autobiography was translated the way it was written, with no changes or omissions, having Bedros Der Bedrossian?s progeny in mind.?Leon, my husband, suggested having it printed as a paperback book rather than making Xerox copies like the Armenian version.?And so, the printed ?Autobiography and Recollections? was ready to be presented to the family during the Thanksgiving get-together in November 2005.

Other translations by Tamar Der-Ohannessian: