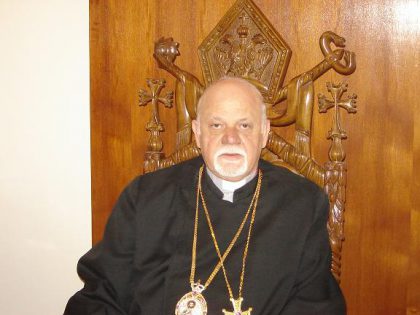 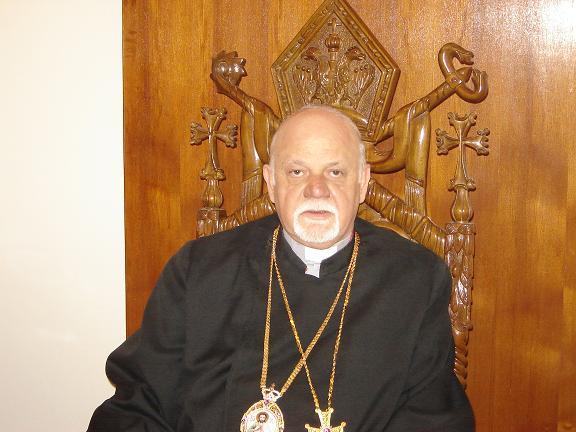 In an interview with Juan Michel (*) a prominent Iraqi Christian shares his views on the situation in the violence-plagued country.

“I come from a wounded Iraq and a severely wounded Baghdad,” said the man in black habit standing in front of some 130 silent church representatives from six continents gathered for a peace conference on the Middle East. “The situation in my country is tragic,” the man continued. “We were promised freedom, but what we need today is freedom to have electricity, clean water, to satisfy the basic needs of life, to live without fear of being abducted.”

The man addressing the World Council of Churches (WCC) 18-20 June international conference “Churches together for peace and justice in the Middle East” in Amman, Jordan was Baghdad's Armenian Archbishop Avak Asadourian, primate of the Armenian Apostolic Church (See of Etchmiadzin) in Iraq.

Asadourian was in Amman representing the Council of Christian Church Leaders in Baghdad. Created in June last year, it is a body made up of 17 church leaders, including two patriarchs, from four Christian families: Catholic, Oriental and Eastern Orthodox and mainline Protestants. The Armenian primate is its general secretary.

Why did Baghdad's church leaders establish this council?
To take care of our faithful in these difficult times and to keep in touch with other Christian bodies. The Council presents the needs of our people to humanitarian organizations and channels their help.

What is the situation of Iraqi Christians today?
The situation is the same for all Iraqis, Christians or Muslims, and it is a tragic one. Bullets do not discriminate between religions. Every day terrorist attacks are targeting people who could be the cornerstone of a new Iraq: professionals, physicians, and engineers. And this is resulting in an across-the-board brain drain, which is a shame since it takes decades to train qualified people.

Are Christians being targeted because of their religion?
Not as such, except lately when Christians living in a certain area of Baghdad have been ordered to leave or be killed. The violence is targeting everyone in the same way. Of course, in a context of complete lawlessness, some thugs do whatever they want. They can threaten you, kidnap or kill you.

Recently, two Christian priests, one Orthodox and the other Chaldean, were killed. In my church, 27 members have died because of the violence since 2003. Although not personally targeted, they were simply in the wrong place at the wrong time. Another 23 members have been kidnapped. Since many Christians are relatively well off, they become targets for possible ransom, just like well-off Muslims do.

According to the United Nations High Commissioner for Refugees, some 1.2 million people have fled Iraq since the start of last year. What about the Iraqi Christians?
Before the war, Christians made up some 7-8% of the population. Today, they are 3-4%. Christians are also moving north within the country, to relatively safer areas. The churches are emptying. In my own church, we used to have some 600-700 faithful worshipping every Sunday. Today, they are 100-150. The reasons are several: they might be afraid of going out, but they also might simply not have petrol in their cars – queues at gas stations are three to five kilometres long – or they might have moved out of Baghdad.

What were Muslim-Christian relations like before the war and what are they like today?
We Christians were in the country before Islam arrived, especially in the northern part. But faith-based distinctions were never an issue: Sunni, Shia, Christian. Our relationships were very amicable. These differences only became an issue after the war started.

However, we work to maintain bridges. We have twice visited the country's most prominent Shia cleric, Ayatollah Ali al-Sistani, as well as the Sunni leadership. And I want to give credit where credit is due. High-ranking Muslim clerics deserve credit for their efforts in trying to prevent the present conflict from evolving into a full-blown civil war.

Are you experiencing the impact of clashing civilizations?
I don't see a clash of civilizations but a bungled war with tragic results for both sides. It seems to me that the occupying powers did not do their homework well. It is one thing to take over a country, and another thing to run it properly in order to allow people to be able to exercise freedom. Security is needed to make democracy viable. Democracy is not only a concept, but also a way of life. Today in Iraq, we need basic freedoms, like freedom from fear, freedom to work, to travel in order to satisfy basic needs. One of the tragic features of the current situation is the fact that they have stolen the nights of Baghdad from us.

What do you think would be a possible way out?
The occupying powers have to enforce the Geneva conventions and guarantee the security of the country. If they were able to bring about security, a lot of problems would be solved. Ours is a rich country. We have land, water, brainpower, the second largest oil reserves in the world – which ultimately instead of being a blessing has become a curse.

My message to my flock is: do not be afraid, but be careful. Confront this dire situation with optimism, and pray and work for a better future.

How could churches outside Iraq help you?
I wonder whether churches outside Iraq are speaking about this issue boldly enough to be heard. If they were able to advocate effectively with their governments, they should tell the occupying powers to fulfill their promises of a better life for Iraq. Promises of a bright future should now be substantiated. One key point in the story of the Good Samaritan is that he not only extended help, but his help was complete and effective.

Some US churches have been asking for a timetable for the withdrawal of US troops from Iraq. What do you think about this?
At this point in time, I don't know… It's a two-edged sword. Is it going to bring about peace or play into the hands of terrorists? But an occupation is never acceptable and is always something temporary that should eventually come to an end.

My message to churches outside Iraq, specially to those in the occupying countries, is: Help us to make life better for the Iraqi people, to alleviate its suffering, to keep their governments' promises for a better future in all walks of life, and ask for God's help in this humanitarian endeavor.

(*) Juan Michel, WCC media relations officer, is a member of the Evangelical Church of the River Plate in Buenos Aires, Argentina.