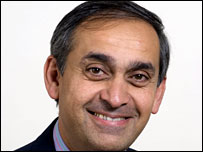 Professor Sir Ara Darzi, who is charged with improving patient care, has been promoted from his previous role as National Advisor on surgery.
?
Sir Ara, chair of surgery at Imperial College London, supports government plans to reconfigure NHS services.
?
When he took over as prime minister, Mr Brown said he planned a broad-based government of “all the talents”.
?
But the Conservatives have criticised the appointment, accusing Sir Ara of having a poor record of supporting access to services for patients and rubber-stamping the demands of the Department of Health.
?
In a report published earlier this year Sir Ara said 80% of operations should be carried out on patients in their local area, with the remaining complex cases undertaken at specialist centres by highly skilled surgeons.
?
Ministers have already embarked on a policy of reconfiguring services along these lines – leading to controversial decisions about individual NHS units which have been bitterly opposed by critics.
?
Sir Ara will combine his ministerial duties with his research and clinical commitments, including the supervision of students.
?
Sir Ara, 47, said: “It is a great honour and privilege to be asked by the Prime Minister to continue that work for patients across the country.
?
“I will be working closely with Alan Johnson to map out the next steps of the reform agenda that has achieved so much in the last 10 years. But we can do better.”
?
Frontline experience
?
He said he would draw on his experience from the frontline to fulfil his new responsibilities.
?
“I am not a politician by profession. My working life has, is and will continue to be centred on patient care.”
?
Sir Ara is internationally respected for his innovative work in the advancement of minimal invasive surgery and in the development and use of allied technologies including surgical robots and image-guided surgery.
?
Dr Jonathan Fielden, chair of the BMA's consultants' committee, said: “Having a focus on improving patient care is a positive step forward.
?
“We will be looking forward to him listening to our concerns and working closely with him to ensure that the concerns of the profession and the public are utilised to improve patient care.”
?
Mr Bernard Ribeiro, President of the Royal College of Surgeons, said: “I am delighted that a practising surgeon, who deals with patients on a regular basis, has decided to take such a high position.
?
“It is an opportunity for government to engage directly with the profession.”
?
The prime minister's spokesman said Professor Darzi would work Monday to Thursday as a minister – being paid for three days – and continue to work as an NHS surgeon, unpaid, on Fridays.
?
Any income from his international private practice will be paid direct to Imperial College to fund research, the spokesman said.
?
Source: BBC, 29 June 2007
http://news.bbc.co.uk/2/hi/health/6254724.stm
?
Photo: Sir Ara Darzi believes people should get treatment locally

ADDITIONAL READING
?
The Guardian (London) – 30 June 2007
Ministerial surprises: Ara Darzi
?
While other ministers hold surgeries in their constituencies, Professor Sir Ara Darzi will be carrying them out for real. On Fridays the new junior minister at the Department of Health will continue to practise as surgeon. The 47-year-old, Armenian-born pioneer of keyhole surgery will be paid by the government for three days a week, but work four. Any money received from his? international private practice will be donated to research at Imperial College, where he has been head of the surgery division. “He is a world renowned surgeon in some of the most hi-tech areas of surgery but he also combines this with great experience of leading change in the NHS,” the prime minister's spokesman said. Mr Darzi is a former member of the NHS modernisation board, and has led controversial reviews on NHS services in Kidderminster, the north-east, Yorkshire and London. He once demonstrated technological improvements in rectal probes to the then shadow health secretary, Ann Widdecombe.
?

Newer PostEmbassy News: The first year of Ambassador Vahagn Melikian in office
Older Post'They have stolen the nights of Baghdad from us' says Archbishop Avak Asadourian