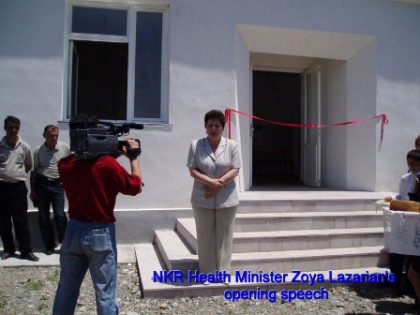 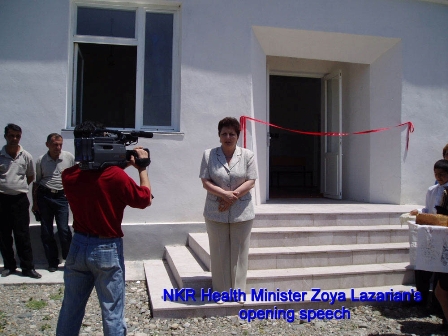 ISHKHANADZOR, NKR ? Friday, June 9 was a day of celebration for the people of southern Kashatagh (Lachin), as the Tufenkian Foundation held ceremonies marking the official opening of a new health clinic here. The clinic will serve several thousand Armenians living in a remote cluster of villages resettled during the 1990s, following the Karabakh war, and marks the Foundation?s latest effort to foster social security and economic development in this vital-yet-vulnerable strategic area.

The June 9 ceremonies drew the attendance of nearly 100 local inhabitants, who often traveled on foot from neighboring villages, along with NKR officials including Minister of Health Zoya Lazaryan and Kashatagh District Administration Head Hamlet Khachatryan. The officials were greeted by children of the Ishkhanadzor village bearing traditional offerings of bread and salt. During the ensuing program, Tufenkian Foundation Director Antranig Kasbarian began by recounting the clinic?s overall importance to the region.

?All of you know the difficult conditions we encounter here in southern Kashatagh,? Kasbarian noted. ?Our hope is that this clinic, in some small way, will raise public health standards in this district, while helping to bring it out of its isolation and toward further integration with the rest of Karabakh. Above and beyond its medical functions, this clinic should serve to instill hope that there is a future for us on these lands; that Armenians will not merely survive, but will grow and prosper here.?

Kasbarian then invited Minister Lazaryan to offer remarks on the occasion. She emphasized the important role of the Armenian diaspora in ?s rehabilitation, and urged all to respond by making full use of the facility. She was followed by Dr. Artsakh Buniatian, Director of the , who described the clinic?s primary care functions in greater detail. He noted that during the initial phase, the clinic will be staffed by one half-time doctor position, two fulltime nurses, one fulltime midwife, and one fulltime guard positions, with the intent to expand into other functions during the coming years. Concluding remarks came from Hamlet Khachatryan, who praised the cooperative spirit of all those who brought the project to fruition.

The program was followed by a ribbon-cutting ceremony, after which all were invited to tour the facility and partake in a luncheon celebration.

The Tufenkian Foundation gratefully acknowledges the help it received from various partners in furnishing and equipping the facility. Special mention goes to the Armenian American Health Professionals of Greater Washington, ?Friends of Armenia? of , and Mrs. Martha Mekaelian, who secured the participation of the Connecticut-based relief organization, AmeriCares.

The Tufenkian Foundation was established in 1999 by New York-based entrepreneur James Tufenkian. The Foundation currently pursues a wide array of humanitarian projects in and in Karabagh, and also sponsors the ?Armenian Forests? NGO.

To learn more about the Foundation?s efforts, please see the Foundation?s website now under construction at www.tufenkianfoundation.org, or contact Antranig Kasbarian at (201) 221-1055, ext.327 or at [email protected]