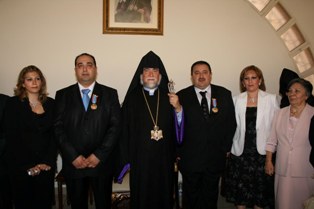 Catholicos Aram I awards them the “Cilician Knight” order

His Holiness Aram I honored brothers Haroutioun and Souren Vartanian from Der-Zor (Syria) during a special event held in the Hall of the Catholicosate following the Holy Mass in the Saint Gregory the Illuminator Cathedral in Antelias (Lebanon) on 24 June 2007. Members of the Cilician Brotherhood, representatives from national political and cultural organizations, the former Ambassador of Armenia to Syria Levon Sarkissian, philanthropist Mr. and Mrs. Gabriel Chemberdjian as well as Armenians from Lebanon and Syria attended the event.

In addition to financing the construction and furnishing of apartments specially designed for students of the parish priest program in the Catholicosate of Cilicia in Antelias, the Vartanian brothers have, over decades, supported the Catholicosate's mission on several occasions. 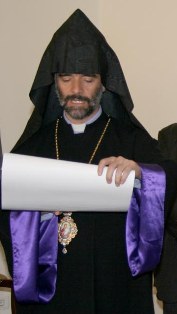 Praising the Vartanian family members who arrived in Antelias from Der-Zor, the Catholicos highlighted their contributions to the life of the Armenian nation and the Armenian community of Syria in particular.

His Holiness also pointed out that the Armenian Genocide Victims' Chapel and Monument in Der-Zor, a pilgrimage area for Armenians worldwide, is also taken care of by the Vartanian brothers.

Primate of the Diocese of Aleppo, Bishop Shahan Sarkissian, read out the Pontifical Encyclical, following which His Holiness awarded the “Cilician Knight” orders to Haroutioun and Souren Vartanian.

Photos:
1- Vartanian brothers with the Catholicosate of Cilicia Aram I
2- Primate of the Diocese of Aleppo Bishop Shahan Sarkissian
reads the Pontifical encyclical.