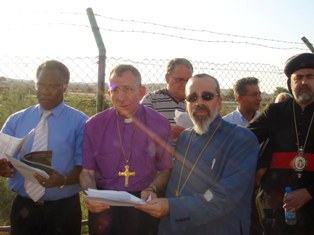 The Catholicoste of Cilicia participates in the peace conference, besides Armenian delegates from Baghdad and Jerusalem

The World Council of Churches (WCC) organized an international conference on 18-20 June 2007 in Amman entitled “Churches in the service of peace and justice in the Middle East”.

Bishop Nareg Alemezian (Ecumenical Officer) and Dr. Nora Bairakdarian-Kabakian (lecturer of political science at the Lebanese University) represented the Catholicosate of Cilicia at the conference. Bishop Nareg was also a member of the conference's steering committee.

The conference brought under the spotlight the Palestinian cause and drew parallels between various cases of human rights violations in different countries both in the past and the present.

In this context, Dr. Bairakdarian-Kabakian presented a paper on 19 June 2007 entitled “The Armenian Genocide: Denial and Impunity”, talking about the bitter experience of the Armenian nation and the important role of the Catholicosate of Cilicia in the efforts to pursue the Armenian cause.

The conference launched the “The Palestine Israel Ecumenical Forum”, in which the Catholicosate of Cilicia will have an important contribution.

The conference ended with a visit to the Jordan River where Jesus Christ was baptized. As a symbol of peace, an olive tree was planted on the riverbank by WCC General Secretary Dr. Sam Kobia, Bishop Mounib Younan of the Lutheran Church as well as Bishops Aris and Nareg.

Photo:
“Churches together for Peace with Justice in the Middle East”. World Council of Churches (WCC) conference 18-20 June 2007, Amman, Jordan.