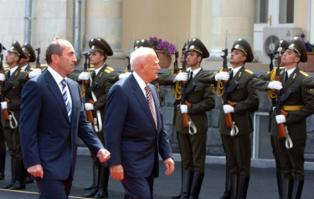 Greek President Karolos Papoulias concluded on 28 June 2007 a three-day visit to Armenia, meeting on the last day of his visit with members of the ethnic Greek community and the Armenian Catolicosate. He visited the Madenataran museum of old manuscripts in Yerevan before receiving a delegation of Armenians of Greek descent. The latter said their small community far exceeds official figures of 1,500 and is over 4,000-strong. Issues on the agenda and the community's requests were outlined in a memorandum presented to Greek Deputy Foreign Minister Theodoros Kassimis, who was present.

Immediately afterwards, the Greek president was received by Catholicos Karekin II, the head of the Armenian Church, for a one-hour meeting focusing mainly on support for Ecumenical Patriarch Vartholomeos (Bartholomew I), following a Turkish high court decision earlier in the week denying the Istanbul-based Patriarchate's ecumenical status.

During his three-day visit to Armenia, Papoulias met Armenian President Robert Kocharian and Prime Minister Serzh Sargsyan, as well as planting a fir tree at the monument commemorating the Armenian Genocide. Other highlights on the agenda included meeting with the Armenian National Assembly Speaker Tigran Torosian and visit to the Yerevan State University.

In the National Theater of Opera and Ballet (named after Alexander Spendiaryan) the First Ladies of Armenia and Greece listened to the concert of distinguished Greek singer Eleftheria Arvanitaki who had cooperated about a decade ago with Armenian American composer Ara Dinkjian (“Meno Ektos“).

Visit to the Genocide memorial

President of Greece Karolos Papoulias and his spouse May Papoulia visited Tsitsernakaberd, the memorial to the victims of the Armenian Genocide, on 27 June 2007. After a minute of a silence the Delegation walked to the Armenian Genocide Museum, where the members of the delegation listened to the director of the Museum Haik Demoian.

The Greece President wrote in the Commemoration book of the museum, “The Armenian Genocide is a black line in the contemporary history of mankind. The perpetrators should recognize it, take responsibility and apologize”. The spouse of the Greece president also made a note in the book, “I once again felt the deep roots that unite Armenian and Greek peoples”.

Karolos Papoulias planted a fir at the Memory Alley.

It is worth mentioning that Greece has recognized the Armenian Genocide officially in 1996.

Mr Papoulias, who visited Armenia several years ago, pointed out to the changes that took place in the republic. “Historical ties unite our states and there are events in our history we can't forget. They always remind of human rights and respect for human dignity,” he said. “Nevertheless, there are forces, which don't derive lessons from the past and repeat fatal mistakes. Our freedom-loving peoples can't tolerate either closed borders or blockade, or 40-thousand army in Cyprus, which is a member of the European Union,” he emphasized adding that Armenia and Greece are struggling for democratic freedoms, human rights and justice.

For his part, Tigran Torosian noted that both states share democratic values and the way of European integration. “Some forces sometimes try to oppose Cyprus and Nagorno Karabakh. But there is a common wish of both peoples to live freely on their lands. The problem should be discussed from the standpoint of human rights. Both Cyprus and Nagorno Karabakh will achieve success in aspiration to freedom on the basis of human rights,” Tigran Torosian conculded.