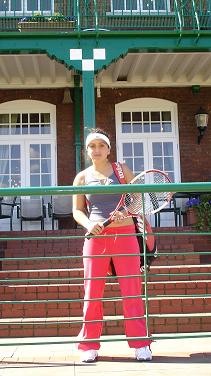 (from ) has been a strong supporter of Zaruhi Harutyunyan from the first moment she landed in the .

Aynedjian, who is the owner of Gibrahayer e-magazine, describes Harutuynyan's first days in the new environment outside : “She has decided to stay in and travel the tennis circuit. With limited possibilities and opportunities in , she is hoping that her risks away from home will soon be rewarded. As a nine year old, Harutyunyan won the Palm Springs – California Under 12 tournament and subsequently won tournaments in Bulgaria, Germany, Holland, France, England in the under 14 and the under 16 categories”.

Aynedjian appeals to the readers to support this exceptional athlete. He underlines that “with her practice schedule and physical training which is already planned and taken care of by interested parties in , the community can show its assistance in several other ways. She will soon go on the world tour. She needs support for travel and accommodation, sponsors for clothing, a budget for her initial take-off, where she will be attempting to break the tennis scene”.

He is confident about the results: “With her kind of potential I am certain she will give back to her homeland what our homeland is unable to give to her right now”.

In May 2006 Harutyunyan won her first ITF (International Tennis Federation) by defeating 's number one player Bianca Swanepoel in the singles of the international world ranking tournament that concluded in . During her stay in Istanbul Zaruhi enjoyed the support of the Armenian Community in that historical city.

Zaruhi has been practicing in since September 2005 in a program with the Cyprus National tennis team and since March 2006 in , with ex Wimbledon champion Jo Durie in the in Hazelwood.

Two days ago in a Category A tournament in she defeated Clara Duarte no. 38 ITF ranked junior in the world.

Zaruhi Harutyunyan will always have the support of Dickran Bedrossian ( based Armenian) and (from ).

Those who want to support funding her tours can make donations at the address given below.

On behalf of GibraHay Youth, we are happy to announce that, we have collected and donated a sum of 50.00 CYP towards Zaruhi's golden achievements, a sum collected from different local youth activities.

We wish her all the best and encourage her enthusiasm for excellence. We would like to take this opportunity to call upon the Armenian Cypriot community to tag along and follow our example in showing the support Zaruhi needs.

You can make your donation at:

Please visit her webpage at: http://gibrahayer.cyprusnewsletter.com/index.htm?p=5

A game of love

One young Armenian tennis player has moved to in the hope of launching her career. She puts LEO LEONDIOU through his paces

A 15-year-old tennis player from Armenia, who came to Cyprus to compete in a local tournament two months ago, has decided to remain on the island, where she hopes to receive the training that will allow her to compete on the professional tour.

In Cyprus for the Aphrodite Cup, the ITF international junior championship held in Nicosia at the beginning of September, Zaruhi Harutynyan narrowly lost 6-4, 7-6 in the second round to Zuzanna Likhova of the Czech Republic, who three years her senior and is ranked well above her.

Harutyunyan was five-years-old when she first picked up a racket and instantly fell in love with the game. “I love tennis so much and want to become a great player,” she said. “I really believe in myself and my aim is to break into the world's top 100 and then work my way up from there. My dream is to win one day.

“I need to play in some ITF under-18 tournaments in order to pick up enough ranking points which will enable me to qualify for the WTA (Women?s Tennis Association) Tour.”

As a nine-year-old, Harutyunyan won the Palm Springs under 12 tournament in California and has subsequently won tournaments in Bulgaria, Germany, Holland, France and England in the under 14 and 16 categories. The ITF (International Tennis Federation) paid for her traveling expenses as part of their youth development program.

While growing up in , her idol was the former world number one Martina Hingis, while her current hero is pin-up girl Maria Sharapova.

But a move to a different country in the search of a career is a big move for a teenager and seems a somewhat unlikely choice, given its lack of a reputation for sporting prowess or the availability of sporting training centers.

Zaruhi Harutyunyan said she got in touch with the Cyprus Tennis Federation before leaving her homeland, her mother and her four-year-old sister to sound them out about the possibility of training here. “They agreed on the condition that I found somewhere to live, so I contacted a champion on the international veteran tennis tour who was quick to arrange the details of my stay and the organization of my practice schedule in . Aynedjian is also the editor of an Armenian e-magazine through which we have been receiving support from Armenians across the world to fund my initial attempts on the world tour. Before coming to I had also written to the Armenian General Benevolent Union Central Board for assistance and I am lucky and grateful that accommodation was arranged at the .”

In , Harutyunyan attends the National Tennis Centre every day for two to three hours where as well as hitting with other members of the team, she takes part in a fitness training program.

She has also made inroads into the island?s Armenian community, some of whom have been driving her to practice sessions and back, in addition to attending community functions and church. She has made new friends at her new home at the , where forty boarders from all over the world stay and attend school. ?What a pity the school has to close down soon,? she said.

It was at the Tennis Centre that I met up with her and being a keen tennis player myself, decided to challenge her to a game, fancying my chances against a 15-year-old girl.

We took to the clay court and started rallying together for a few minutes before Harutyunyan got bored with toying with me and started unleashing winners into every corner of the court.

I then asked to see her serve in action. She promptly proceeded to send down a serve that I barely managed to get my racket onto before acing me clean on the line. It left me wondering how somebody so young could generate so much power. In my 20 years of playing tennis, I have never faced such a formidable opponent.

“In , it was difficult to train because facilities are not very good,” she said. “Here, there are professional coaches who know what they're doing.”

When asked what her impressions of are, Harutyunyan said, “I like it here and have made some good friends. Of course I miss my home and my family but it's good for me here as I'm gaining good experience. My family are really happy for me as they know that I'm improving every day.”

National Tennis Coach Yiannos Hadjigeorgiou gave his opinion on how good he thinks Harutyunyan is.

“She's improved a lot since the first time I saw her and is very willing to learn. She was out of practice when she first arrived and when I saw her in the Aphrodite Cup, she didn't play that well. But nobody can play well without practice. She is definitely getting better but I need to see her in an official tournament before I can gauge how good she really is and what her potential is. I would describe her as an aggressive baseliner.

“The Cyprus Tennis Federation allows her to use our facilities and to train with us at no cost. She is unofficially in our national program.” He added that there is a large Armenian community across the island “who wanted to help her from day one.”

Hadjigeorgiou worked with ' biggest sports star, Marcos Baghdatis, up until the Limassol-born star left for at the age of 14.

The two were reunited during January's Australian Open in , where Hadjigeorgiou worked as his personal coach and they also work together on the Cyprus Davis Cup team.

Following in whose footsteps?

There have been quite a few players of Armenian descent who have made an impact on the professional game, most notablly Andre Agassi, whose father is of Armenian and Assyrian ethnicity from . Former Wimbledon finalist David Nalbandian of , currently ranked 12 in the world, is also of descent, as is Sargis Sargsian of , who has been ranked as high as 38.

On the women?s side, Manuela Maleeva is the most famous. Born in , Manuela was the oldest of the four children of Bulgarian tennis star Yulia Berberyan, who came from a prominent Armenian family, which found refuge in after the 1896 Armenian massacres in the . Marie Gayane Mikaelian of has also competed at the highest level.

In , and Haig Ashdjian are both ranked in the top 100 in the world on the seniors tour.