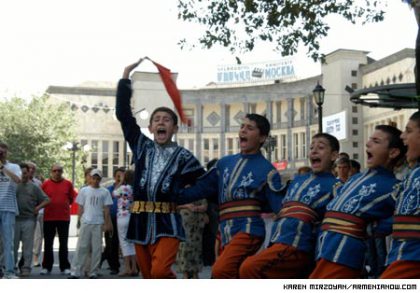 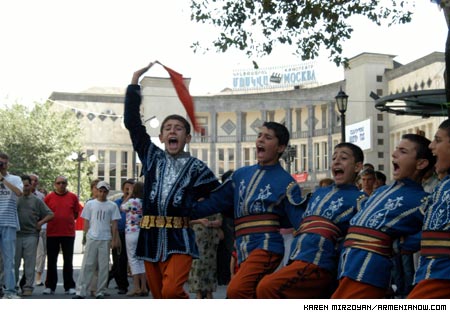 One Culture, One Week: Second Pan Armenian festival kicks of in

will again be a city of ?Nareks? and ?Nares? beginning today (23 June 2006), as the second annual Pan Armenian Cultural Festival, ?One Nation, One Culture? begins.

During the week-long festival the weekdays will also be renamed in Yerevan; Sunday will be the Literature Day, Monday ? the Fine Art Day, Tuesday ? the Music Day, etc.

This year 1000 artists from the Diaspora and 1000 from and Karabakh will be participating in the festival ? 500 more than last year.

Jivan Movsisyan, Executive Secretary of the Agency for Ties with the Diaspora at the Ministry of Foreign Affairs, says the interest towards the festival is tremendous this year.

?People have appealed from countries from where we would never expect to hear ? for instance, a choir of 75 singers is arriving from , a big group is arriving also from ,? says Movsisyan.

This year also the festival is organized under Presidential authority, with about $280,000 in funds from the state budget.

?There are no unnecessary expenses this year, this is the least that is needed for organizing the festival; all the participants from the Diaspora will cover their own expenses, the government has undertaken the expenses only for Karabakh and Javakhq delegations,? said Tamar Poghosyan, the foundation?s executive director.

Assistant to the President Vigen Sargsyan says all the pan-Armenian events should be of regular, traditional nature to allow strengthening the Armenia-Diaspora ties.

According to Armen Manukyan, the Art Manager of the Festival, the main cultural groups acting in the Diaspora are of amateur nature and the joint concert, communication and experience sharing with the professional groups from can be a big progress for them.

During the festival days almost all the parks, concert halls and galleries in the central part of the city will be busy. Artistic groups will visit also Syunik, Vayots Dzor, Shirak, Lori and Aragatsotn provinces, as well as Karabakh.

?This is an extremely important phenomenon for all of us ? we are really united with one nation, one culture. These seven days will be unforgettable for all of us,? says Sonya Varuzhan, a singer from .

The directors of this year opening ceremony will be Hrachya Ashughyan and young director Lusine Martirosyan.

They say there will new dancing performances and the whole concert will be non-stop in one joint staging.

?The primary aim of the concert scenario is to present the whole cultural potential, from architecture to the art of singing and that will be done by a synthesis of various genres of art ? theater, cinema, dances, songs ? this will be a real novelty,? says Martirosyan.

And another novelty will be presented by the organizers of the festival: during the seven days of the festival a Fest Club will be open for all the participants and accredited journalists at the Avant-garde Folk Music Club every night from 11 to enjoy Armenian pop and jazz musicians? performance free of charge.