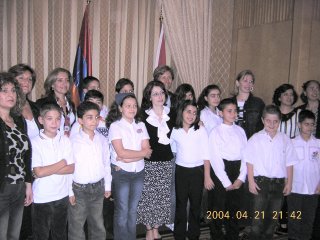 For the first time in many years the Armenians of Abu Dhabi have agreed on a united program for Genocide commemoration, involving the Embassy, the Council of Armenian Community and the Armenian Cultural Association. This year coincides with the 90th Anniversary of the Genocide committed by the Ottoman Turks.

Mr. Aghvan Vartanian (specially invited from Armenia) will deliver a lecture, analyzing the event that led to the planning of the first genocide of the 20th century, which is still waiting for formal recognition from the perpetuating Turkish authorities and their modern-day heirs.

The National Chamber Orchestra of Armenia, under the baton of Maestro Aram Gharabekian, as well as the students of the Armenian Community Weekly School will present a cultural program.

On the Same day (from 11:00 am until 17:30 pm), the Embassy of Armenia in Abu Dhabi would be opening a condolences book for the memory of the one million and half victims of the Armenian Genocide. Armenians and foreigners are invited to record their thoughts on this significant event in the modern Armenian history.