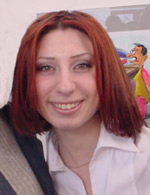 It is very unfortunate that the Armenian officials in the United Arab Emirates did not took advantage of the presence of the “Queen of Caricature” Ms. Agnes Avagyan in Dubai in March 2002, where she was invited to participate in a caricature competition organized by the local Arabic “Al Bayan” daily. She was the youngest and the only female participant of the competition.

Some Community officials turn the world upside down to organize an Armenian event, but when there is a ready event which is presented to them on a golden plate (like the fortunate invitation by Dubai cultural authorities of Agnes Agagyan to take part in the above competition), they immediately become deaf and blind.

Now let us know more about our artist:

Agnes Avagyan – The Queen of Caricature

At the young age of 23, she has already presented seven exhibits in Yerevan, St. Petersburg, Aleppo and Beirut. Registered in the Russian Guinness Book of Records as “Diva”, she is nominated to be in the Guinness Book of World Records for her unique ability to paint cartoons with both hands simultaneously.

Born in 1980, Agnes Avagyan started drawing when she was only two. From early childhood, she was told that painting should not be her profession since it does not provide for means to life. Fortunately, her passion for art was too strong to ignore.

She started her education in arts in 1994 at the Art College and now continues her studies in the Yerevan State Academy of Fine Arts.

Her works attracted artists of the Repin Academy of Fine Arts and the talented artist was invited to enter the Academy. However, due to her inability to pay the foreign student fees, she was forced to return to Yerevan.

Despite her young age, Agnes has a strong professional background. She has collaborated with numerous magazines, such as “Hey”, “Manana”, “Gordzenker”, “Mankadz Yerkir”, “Karavarum”, and drew cartoons for several newspapers.

The young artist even illustrated some books with her colorful and bright paintings, including, “The Zoo-Boy”, UNICEF's “Children's Rights”, and “Peter Pan” translated to Armenian.

At present, she works as a cartoonist for “Hayastani Hanrapetutyun” – an official organ of the National Assembly of Armenia and “ArmeniaNow.com” weekly online news magazine. She also performs projects for some print and online issues.

Agnes also collaborated with UNDP and a number of other organizations.

In March 2002, “Al Bayan” Dubai State Publishing House organized a caricature competition. Twelve professional Armenian cartoonists presented their works along with Agnes. As a result, she was chosen to take part in “The Second International Caricature Forum” in Dubai, UAE. She was the only Armenian among 15 professional cartoonists from 41 countries. Even more impressive was the fact that she was the youngest and the only female participant of the Forum.

In 2000, 2001, 2003, Agnes was the youngest artist to participate in the exhibition of the best cartoonists of Armenia.

In June 2002, she was invited to Aleppo, where her sixth personal exhibition was organized by the “Hamaskayin” and “Aram Manougian” public organizations in the “White House of Aram Manougian.” 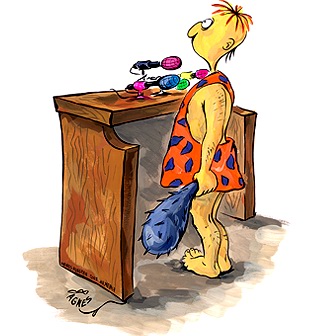 In March 2003, she was invited to Beirut, where her seventh personal exhibition was organized by Armenian Catholics at Mesrobian Technical College for it's 20th Anniversary. The president of Lebanon, Emil Lahoud, received Agnes in his Baabda palace. He gave Agnes a presidential medal, highly evaluating her talent and wishing her further success.

Agnes gave president Lahoud a caricature where the president is pictured in Armenian national dress with an Armenian flag in his hand. This caricature expresses Agnes' thankfulness toward Lebanon, which sheltered thousands of Armenians escaping from Genocide, as well as a high appreciation of president Lahoud's efforts in strengthening Armenian-Lebanese friendship and relations.

Agnes' talent is universal: she can draw simultaneously with both her hands and has been assigned a “Diva” title in the Russian Guinness Book of Records for this extraordinary ability. She has demonstrated this remarkable ability in public many times and always does in the opening ceremony of her exhibitions.

Her cartoons make people laugh and are merciless toward bureaucracy, injustice and ignorance. Her paintings are warm and bright. Her positive look in the future is passed to the viewer and makes us notice the beauty around.