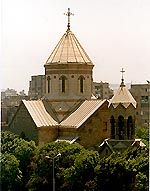 Hye means Armenian. Hayeren is our language. My homeland is Hayasdan, the land of all Armenians. Mount Ararat is our eternal mountain, where Noah's is said to be buried; it is the symbol of our survival. When you look for a member of the Armenian community, a friend or relative anywhere in the world, you will probably mention a surname ending in “ian”: Papazian, Zorayan, Garabedian…

Where are the Armenians, and why? Our history is one of challenges — of the struggle to survive. We are in Spyourk, the diaspora. The massacres of the Armenians committed by the Turks are part of our living history.

The Armenians keep their contributions to human civilisation alive in their collective memory, passing down stories to each new generation. The Armenian role in the art of printing, for example, can be traced back to the 14th century, when Venetian captain Andon Haigazoun (Anthony the Armenian) helped convey the secret Chinese art of printing books to .

The first Armenian books were printed in by Hagop Meghabard (James the Sinful). After the establishment of printing houses in , Constantinople, , , and finally Etchmiadzin in , an Armenian printing house was founded in in 1772 and the first Armenian periodical, Aztarar (The Monitor), was issued. Its publisher and editor was Haroutioun Schmavonian.

The first Armenian school in , the , was built in 1828 in Haret Zuweila, Bein Al-Sourein, close to St Sarkis, an Armenian church at the time. The founder, Yeghiazar Amira, who came from Agn in , left all his property in Mohamed Ali's care. After his death in 1826, Mohamed Ali called Yeghiazar's cousins to . They founded the school, a hotel and a hospital in Haret Zuweila, naming them all after their uncle.

Due to an economic crisis in , Garabed Agha Kalousd came from Van to settle in . A powerful financier, he wanted to found a larger school for the growing numbers of Armenians settling in . In 1854, he moved the school to Darb Al-Geneina and named it Khorenian, after the Armenian historian Movses Khorenatsi. Before his death, Kalousd endowed 460 feddans and other properties from which the school was to benefit.

In 1904, Boghos Pasha Nubar moved the to Boulaq. In 1907, he founded the and kindergarten on a three kilometre piece of land.

In 1978, the governorate issued a decree for the demolition of two of the three Kalousdian school buildings, which were to make way for the construction of the 6 October bridge. Today, only one building and a playground remain on .

The three Armenian schools in eventually integrated a secondary education programme; students who have graduated can immediately enter the Egyptian university system, after passing the official Thanawiya 'Amma exams.

Newer PostThe EU should help resolve the Turkish-Armenian conflict
Older PostHellenic Genocide: Was it a “Catastrophe,” or a “Devastation?”