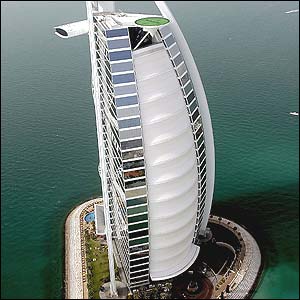 In the 20th February 2005 issue of the newspaper he reported that Agassi has promised tennis lovers in the UAE a fulfilling week during the Dubai Tennis Championship. Agassi Arrived Dubai on 18th February 2005 and headed directly to Dubai Tennis Stadium for practicing.

At the end of his report Gomes mentioned that Agassi is known to have Iranian roots.

In his second report (21st February 2005), Alaric Gomes concentrated more on Agassi's ethnical background. The report was titled “Agassi keen on journey to roots”. Agassi was quoted saying “If I have more time here (in ), then I don't mind making a quick trip to Teheran and seeing things for myself”. He added “Most of what I've heard about life in this region, and in particular, is from my father”.

Andre's father Emmanuel Agassian is said to be born in and moved to . He grew up to be an accomplished boxer and represented in the Olympic Games of 1952. Soon afterwards he immigrated to the arriving there penniless, but full of dreams and determination. He changed his name to Mike Agassi and settled in , where he pursued his boxing career for a while.

Agassi admitted that most of the players do not get the chance of taking a closer look at the places they visit while on the Tour. “But, it's been quite different here and I've been really getting a good insight of this place,” he added.

The last of these articles by Gulf Reporter Alaric Gomes was about the friendship that has developed between Armenian tennis player Sargis Sargsian and Andre Agassi, since they were first introduced in 1995.

Under the title “Having a friend and being one” (22nd February 2005), he interviewed Sargis Sargsian. The later admits that he has very few friends. “That's three or four in a lifetime. I mean people whom you can really trust and open out to. And Agassi ranks as one of these true friends”, he stated.

Sargsian went to the with the Armenian national team in 1993 and ended up staying there. Two year later he met Agassi. “That was so many years ago, but it is still very special to me today,” Sargsian says remembering. “He's been an amazing guy and truly unbelievable as a friend”.

Gomes comments that “May be it is their common Armenian roots that helped them bond so well”, to which Sargsian replies “No, I don't think having a common background had anything to do with our friendship. It's just that we have a lot of things in common. I really care about him and every time he plays, I want him to win”.

Andre has turned to be a raw model for Sargsian. “He's so loyal and I respect this too much. He'll do anything for his friend. He's helped me so much that I look up to him and try to be like him” he says.

Photos: The authorities in transformed the helipad on Burj Al Arab (the world's only seven star hotel) to the world's highest tennis court. Swiss Champion Roger Federer (who eventually won the Dubai Tennis Championships this year) and charismatic player Andre Aggasi could not resist the temptation of hitting some balls on this court