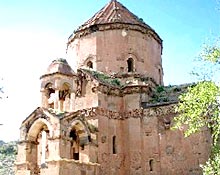 In a press release from dated 11th November 2004, the “Assembly of Armenians of Europe” alerts that the 10th century Armenian Church of the Holly Cross in (Lake Van, ) continues to be subject to vandalism. Even the Turkish media sources reluctantly admit this.

For example, the correspondent of the “Milliyet” newspaper confirms that the marvelous exterior carvings of the Church are regularly being used as targets for shooting practice. To prove this the newspaper has published a photo where the present state of the carvings is clearly shown.

The correspondent mentions that the Church is guarded by a watchman during working hours in the summer, but during other times it is completely unprotected. To make matters worse local people believe that there are treasures on the left behind by Armenians who escaped the Genocide of 1915. It is ironic, but the guard of the Church himself was arrested some time ago when he was trying to dig for “treasures”.

It is not the first time Turkish newspapers shed crocodile tears on the fate of the . Already in May 2004 “Zaman” daily warned that the Church is close to ruins.

About the Holly Cross Armenian Church of

The is situated in Lake Van, Historical Armenia (now ). The Church was built during the reign of King Gakik I of the Vaspurakan Dynasty during the years 915 – 921 B.C. This is one of the finest jewels of Armenian architecture. It is built from red colored cut tufa stone. All the interior walls and even the cupola are covered with beautiful frescoes, the best of which is the one painted on the high altar wall representing the triumphal entry of Jesus into , sitting on a white donkey. Because of its novel conception, its high reliefs and frescoes are of rare artistic value.