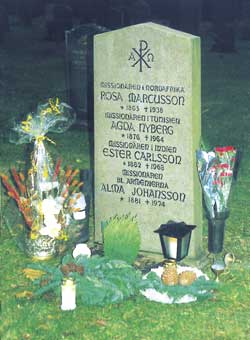 We received the following article from the Armenian Relief Society (HOM) of .

It is a beautiful spring day, the sky is blue and the birds are singing. Spring is finally here in .

Anna Mahdessian is on her way to the cemetery in the center of the city.

For the Armenian community of this is an annual pilgrimage. You see parents with their children, young people, old people, heading towards Alma Johansson's grave.

“Who is Alma Johansson?“, asks Daron, the little boy holding her mom's hand, somehow terrified to be in a cemetery. This is the first time he is in a cemetery. Death is abstraction for him. Anna calms him down and whispers a few comforting words in his ear.

On the 17th of April, in response to the initiative of the Genocide's 90th anniversary committee, Anna and many other Armenians paid a tribute to the Swedish missionary Alma Johansson.

This was an extraordinary woman, who back in 1915, did her outmost to help Armenians during the massacres, by awakening the public opinion on the matter. It was thanks to her efforts that Hjalmar Brantning, the first Swedish Social Democratic prime minister, then the finance minister, argued for the Armenian cause, and described the massacres as genocide, by using the Swedish word for that “folkmord”, long before R. Lemkin (who coined the English word “Genocide”) did.

?We shall always remember her, we are always going to be there to show our gratitude. This is a sacred place for us, Swedish Armenians, explains the chairman of the committee representing 's Armenian Relief Society (HOM) Mr. Hagop Khatcherian, arranging the flowers by the grave.

“I have some carnations, which is for eternal love,? Says Anna with a smile and then sinks her gaze to the candle burning in her hands.

Father Norayr prayed for her soul and everybody came to the grave with their ointments.