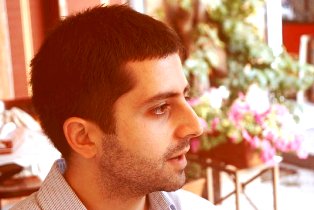 While having my evening tea I was checking my Facebook profile using Ultrasurf. Let alone the slow connection and breaking the ban on the website with thousand tricks, I was fed up with the new applications of Facebook popping up on my screen like mushrooms. The most na?ve among them was a new application which allows you to pick five favorite stuff and show off to your friends. Those five favorites might be flags, cities, movies, books, etc.

I saw a friend had picked five flags, all five were the flag of Syria, and posted a comment after it, which says ?proud to be Syrian?, in capital letters and accompanied with symbols and marks like [[((**!!##^^))]] all over it, thinking that would make it a more effective and powerful statement.

Ironically, I started to wonder if I am a proud Syrian too. I started searching the same network for Syrian groups and pages expressing the same ideas. Luckily, I found tens of them. Most of them have the same texts and various old pictures of Damascus, Aleppo and other cities. There were also new photos of Syrian people in traditional dresses, the beautiful landscapes of the country, and the ancient monuments by talented young Syrian photographers. Everything was almost the same in those groups. It was something which makes you think.

As a Syrian citizen of Armenian descent, I have plenty of reasons to feel attached to Syria and be law abiding citizen. After the WWI and the Armenian Genocide, life has given a second chance to my grandparents in Syria. Many of my family elders have served in the army and even participated in wars defending this country. I have always admired our foreign policy, which was able to defend the nation's rights and interests against all odds and sanctions for a long time. In brief, the reasons that make me love Syria are too many to count.

Despite of that, I had a second thought before admitting ?proud to be Syrian? myself.

Last year an Iranian friend was in Syria and he wanted to visit my University. I took him to our faculty, the Faculty of Law. He was surprised to see how university students have carved on their desks things like Haifa , Afrin , Abu jamajem , etc… Perhaps this was the only way for those young students to express their feelings towards their loved girls, hometowns or friends, since they do not have the proper space, destinations or the atmosphere in the city. However, the biggest shock was waiting for him at the restroom. He couldn?t enter it, because of the nasty odors coming from the flooding toilets… Maybe he started thinking, that if this is the Faculty of Law, how would the Syrian courtrooms look like?

Last week, I witnessed a huge fight in my street over who should go back with his car and let the other pass. Those scenes reminded me of some ?Lord of the Rings? battles, where brutal enemies fight each other with axes and swords, so eager to cut the opponent?s throat. Sadly, this has become the typical Syrian way to solve problems…

Just a few hours ago I was at the mobile service center paying my bills. Let alone the black humor of paying expensive bills for an improper and extremely poor service, the clerks on the monitors were treating the costumers as if they were sub-human beings, who cannot understand anything… Experiencing the “Gosh! How stupid and retarded they are” attitude!
I was remembering all these while I was surfing those pages and groups having the keywords ?proud to be Syrian? and I was wondering how much proud one can be. It is clear that this is not all about online web pages and groups. Those circles do exist in real life and they are not only virtual. It is like a one big royal aquarium, separated from the natural environment, where the spoiled goldfish swim together fancying all the goods inside, just like a paradise. In fact, to be proud of being Syrian has become like an elitist trend of ?how you can act cool among your friends?. It?s the latest fashion in the world of socializing, emptied from all its rational explanations.

There are many kinds of people in that ?royal aquarium?, but not my university friends, for example. There aren?t those dissatisfied faces pushing each other every morning in the crowded buses, nor those nervous drivers with big mustaches, angry with the fuel prices, and ready to jump out of the window to throw some ?kind words? at you if you don?t step aside of HIS road.

People in this ?royal aquarium? are generally good looking young boys and girls always in cute dresses; they usually spend their vacations abroad. Many of them attend a quality foreign university or a posh private university in Syria. Probably they would also have a residency or citizenship of a European or a transatlantic state. I know a few people among these groups, who enjoy their life in Syria as a permanent vacation. They spend most of their time in all those restaurants, hotels, resorts and entertainment places where the regular Syrian citizen cannot afford it even in 10 years. They stand tall watching all the new caf?s, restaurants and the western brands in their hometown, and suddenly get a Syria junkie and show overreacted sentiments towards their country. Sadly, only such things make those people proud to be Syrian.

Perhaps someone should tell them that cuisine or fashion is not freedom and progress. That being proud to be Syrian isn?t just to post a flag, a picture of Aleppo Citadel or a “national figure”. It is not a matter of showing off an empty passion, but to read and understand our history, culture and literature. A few days ago, a play of Syrian writer Saadallah Wannous by a local theatre group made me more proud than the whole classy trademarks and big giant brands, posh caf?s and fancy restaurants of the last decade. However, my happiness didn't last so long… The Directorate of Culture banned their second show, because it was “offensive” to religion!

Frankly, I believe that there might be some sincere people who are actually proud to be Syrian and they feel very cozy in those circles, which I mentioned in this text. I suppose that they have their own reasons. As for me, I feel no need to declare over and over again, or to prove to anyone, that I love my country and I am always ready to serve it the best way I can. I'd rather not overreact and become a hypocrite. I believe that we have the right reasons to be proud natives of our country, but, as a Syrian society, we have a long way to cut, by recognizing ourselves, our rights and duties, before we cry out loud in front of the whole world ?proud to be Syrian?.

*An edited version of this article was published in Forward Monthly Magazine of Syria in the May 2009 issue.