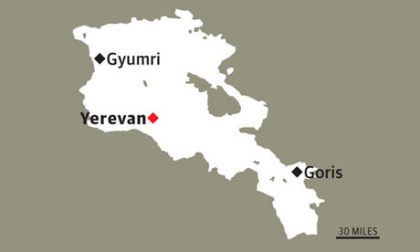 As posted in the Guardian 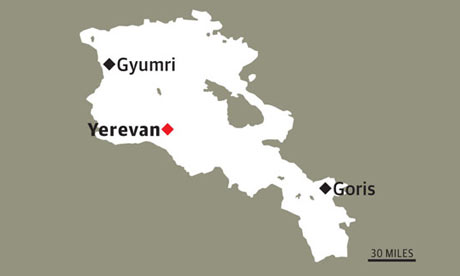 Potted history of the country: In AD301 Armenia became the first country to adopt Christianity. In the middle ages it was absorbed into powerful empires: Byzantine, Seljuk and Mongol. Under Ottoman rule Armenians were persecuted: Armenia claims up to 1.5 million people died in the mass killings of 1915-17, often referred to in the west as the Armenian genocide. Turkey blames inter-ethnic clashes and disputes the toll. From 1922 to independence in 1991 Armenia was part of the USSR.

Political pressure points: Ten people died in riots following the election of the prime minister, Serge Sarkisian, in 2008, after claims of vote-rigging. There are no diplomatic ties with Turkey over Ankara's refusal to recognise the 1915 killings as genocide. Relations are also antagonistic with neighbouring Azerbaijan over status of the disputed Nagorno-Karabakh region.

Landscape and climate: Armenia is a landlocked, highland country with peaks rising to 4,000 metres, swift rivers and little forest. At about 1,900 metres above sea level, Lake Sevan is one of the largest high-altitude lakes in the world. Climate is continental with hot, dry summers, cold winters and overall low humidity.

Healthcare and disease: Maternal and child healthcare have improved, but general mortality rates have risen alarmingly since the fall of the Soviet Union. TB is a scourge and tobacco consumption is increasing, with nearly 70% of men in the 24-65 age group smoking. Unofficial payments, including bribes, account for almost two-thirds of health funding.

Average number of children per mother: 1.3

Economic outlook: Remittances from Armenia's large worldwide diaspora have shrunk in the global economic downturn. The country will be relying heavily on its close ties with Russia, which invested ?1.3bn last year.

Local recommendation: Tatev monastery, situated on a rock bluff on the edge of Vorotan canyon near Armenia's border with Iran. Its churches date to the 9th century and were once home to 600 monks

Did you know … Armenia claims to be “motherland of the apricot”, and its apricots are considered to be the best in the world.