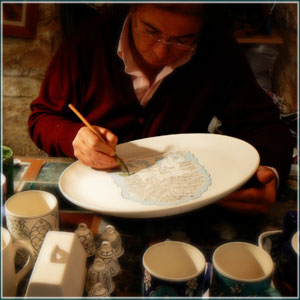 The pottery industry in Armenia goes back as far as the 9th century BC where dishes, jars, vases, cups and various pottery objects were produced with no ornaments.

Kutahia, 125 miles south east of Constantinople. A city that most of its population were involved in the pottery industry and was well known as a center of Armenian pottery.

Kutahia potters produced tiles as wall decorations, they were commissioned by the royal court to tile palaces and mosques mostly in Constantinople, and started competing with potters from nearby Iznik, a very well known center of Turkish pottery.
The art of Armenian pottery developed throughout the years, it was influenced by changes the Armenian people passed through their long history. One of the most important event was in the year 301 AD, Armenians adopted Christianity to become the first Christian nation, another important event was the creation of the Armenian alphabet by Mesrob Mashdotz in the year 406AD. Inspired by those changes, Armenian potters started confirming their works by inscriptions in Armenian and representations of biblical stories became very popular.

Meanwhile Kutahia potters developed a distinctive style of their own, by mixing designs inspired from manuscript illuminations and arabesque motifs, combining to them motifs such as Cypress trees, grapes, lilies, roses, carnations, palms, lotus and pomegranates, later various animal motifs were added to the designs such as deers, birds, fish and peacocks thus creating an impression of a garden of paradise. All those designs composed a new and natural style known as Armenian pottery.

The Kutahia ceramics is characterized in its blue color painted on white ceramics, In the 16th century following years of experiments turquoise color was added to become also one of the dominant colors used by Armenian potters, after a short period a new group of colors were added such as green, red and yellow to create a combination of colors used till today in Jerusalem by Armenian potters. A tomato red color that was very popular disappeared in the 17th century; no written cause was ever recorded about the vanishing of the red color. Meanwhile the black color was developed to be used as a divider between different colors.

The pottery industry in Kutahia reached its peak in the 18th century after the decline in Iznik workshops. The demand for Armenian pottery increased and pottery was widely exported to all neighboring countries especially Jerusalem. In the 19th century, there were almost 100 Armenian workshops in Kutahia, during the second half of the century pottery industry started to decline and families started leaving the city towards Istanbul, Izmir and Eskishehir. By the year 1914 there were 3 pottery workshops in Kutahia. Garabed and Haroutune workshop, Haji Minassian brothers workshop and David Ohannessian workshop. People from all over visited those workshops and admired young Armenian girls drawing and painting very skillfully Armenian motifs on ceramic tiles and pottery objects. Unfortunately the production of Armenian pottery didn't last long in Kutahia, in the year 1915 the city was emptied from it's Armenian population as a result of the Armenian genocide, the Minassian brothers reached Greece, in Athens they started a ceramic workshop with a Greek partner, several years later one of the brothers passed away and the other brother left the business. David Ohannessian reached Jerusalem and was invited by Mr. Ernest T. Richmond, a British architect and director of the department of antiquities and Sir Ronald Storrs, military governor of Jerusalem and founder of the Pro Jerusalem Society, which was taking an active interest in the restoration of the tiles of the Dome of the Rock. The project was to produce new ceramic tiles as a replacement for the old and already fallen ones. The idea was to make and paint the new tiles, glaze and fire them in the ancient kilns located over Solomon's stables in the Mosque esplanade. David Ohannessian brought with him apprentices specialized in various aspects of pottery making, and by the end of 1919 he established the first Armenian pottery workshop under the name Dome Of The Rock Tiles. David Ohannessian and his workers could not cope with the major technical problems of the tiles in the Dome of the Rock and the project fell through.

David Ohannessian succeeded in establishing a pottery industry, later to become part of the local subculture in Jerusalem. He employed and taught the skill of making pottery to young Armenians from the community mainly orphans. His workshop lasted till 1948.

Meanwhile several new Armenian potters established their own workshops and continue the tradition of making pottery in Jerusalem. In the year 1983 after years of painting on canvas, I decided to try the art of ceramics, the idea was to revive this old tradition of Armenian pottery, to present it in it's original form, to develop its designs and methods. The first two years were spent mainly on technical research and experimentations. Through very hard work and after much trial and error a great deal was achieved. Looking backwards upon history the contribution in the development of the designs and methods is huge, many new motifs were added to the ancient ones, some I took from very old manuscripts and some were influenced by changes the Holy Land had witnessed culturally and politically. I copy directly from old pieces, but I also create from several different motifs a single one. I'm gratified that with the help of my wife Sonia, who is an accomplished painter in her own right, managed to enrich and transform the existing repertoire of motifs.

The reputation and proficiency of technique of Armenian pottery is high. Although making pottery requires time and high skill we continue in our gallery producing ceramics as our ancestors did.

Ceramic is composed of clay quartz and lime, this mixture is formed either by molds or on a wheel, those formed objects are fired at about 900 degrees centigrade. The designs are prepared very carefully and artistically on a sheet of paper pounced with tiny pin prick perforating the paper along the lines of the design. Those designs are transferred on the pottery by applying powdered charcoal through the holes onto the surface of the object. With black color the outlines are traced, then colored with traditional colors, later the objects are glazed either by spraying or dipping methods. The transparent glaze is very important for the permanence of the colors and it covers the piece with glass-like substance. The glazed pottery is fired again at about 1050 degrees centigrade. The whole procedure of preparing the pottery, painting and firing could reach 15 days depending on the weather and size.

Today most of the designs are painted in a very high artistic and technical standards, some designs are silk screened on tiles and painted by hand, some are applied free hand and some are copied by powdered charcoal and then painted, the glazing is done manually. Ceramic painting in Jerusalem is almost an Armenian art; it became an integral part of our history and our culture.