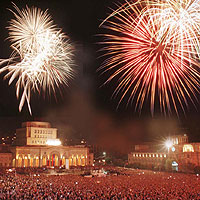 The Armenians, an ancient people living on an ancient land, call Armenia Hayastan, and themselves Hai. The indigenous people of the land of Ararat, Armenians forged their national identity with the rise of powerful Armenian kingdoms, the adoption of Christianity as Armenia's state religion in 301 a.D. and the creation of the Armenian alphabet in the fifth century, which spurred the development of literature, philosophy, and science.

Archaeological and historical facts point to the development of civilization in the region with the formation of the Urartu kingdom, also mentioned in the Bible, around 980 BC.

No wonder that Armenia is fast becoming a tourism hot spot. The richness of its cultural, historical and artistic heritage is set in an imposing territory made of spectacular mountains, valleys, canyons and forests. Lake Sevan, at 1.900 m. above sea level, is one of the largest and most beautiful mountain lakes of the world. The best view is from the Sevanank Monastery (IX century), situated in panoramic position on a promontory, surrounded by crystal clear waters and breathtaking mountains. Yerevan is the buzzing capital city that offers every kind of cultural and artistic attraction – museums, galleries, theatres, music and concerts – and entertainment with hundreds of restaurants, cafes and shops.

Armenia?s stable political situation has given way to a fast-growing economy and an expanding travel industry. Over the past five years, the Armenian Tourism Development Agency (ATDA) has been developing programs to showcase Armenia?s many attractions to the world travel industry and tourists alike. Visitors to Armenia come mostly from US, Canada, South America (Argentina and Brazil), Europe (France, Germany, UK, Greece, Italy), Middle East (Lebanon and Syria), Iran, CIS countries (former Soviet republics) and Japan.

The most convenient way to visit Armenia is by air through the Zvartnots International Airport, located just outside of Yerevan, and Shirak Airport in Gyumri. Under new management, Zvartnots International Airport is undergoing a welcome makeover that will transform the airport into a world-class facility. Among the major airlines operating in Armenia are Armavia Airlines, Air France, Austrian Airlines, British Airways, Czech Airlines, Lufthansa Airlines, Aeroflot-Russian Airlines.

Overland road routes and rail links connect Armenia with its neighbour countries. Currently, borders with Turkey and Azerbaijan are closed. Two highway routes and one rail-link provide access through Georgia to the Black Sea Ports of Batumi and Poti. Additionally, there is one route south through Iran to the Persian Gulf. Armenia has made great strides in its road network, with significant investment resulting in nearly all the main highways to be paved and in good condition. The main railway station in Armenia, the Sasuntsi Davit Station connects the capital city with several large towns of Armenia as well as Tbilisi and Batumi (Georgia).

From ancient times, Armenians have cherished their artistic traditions, which reflect a unique culture and landscape. Aspects of everyday life are expressed in the most artistic fashion, in needlework, embellishments, carvings and design.

Armenia is often referred to as an open air museum. Tourists find over 4,000 historical monuments throughout Armenia ? ancient cave dwellings, temples, churches, monasteries and thousands of unique ?khachkar? stone crosses – covering various periods of the country's history from prehistoric to Hellenistic times, from the early to medieval Christian era. Within Yerevan alone there are more than 40 fine arts museums and galleries.

Rich and unique cultural and artistic heritage. Destination ideal for:

Religious tours and pilgrimages: first country to adopt Christianity as its state religion in 301 A.D. and distinctive religious traditions

Archaeology: visits to sites as well as participation in archaeological camps

Armenia is a rapidly developing into a modern organized country with a Western style of life. However, visitors should not expect European or American lifestyle. Respect for traditions and personal relationships are still important. The level of service and facilities is good and in constant progress, but occasionally you will have to deal with some lack of organization, which is paid back by the privilege of visiting this wonderful country that maintains its unique traditions.

Five star classification system is applied for qualifying the hotels. Some of the hotels combine traditional Armenian architectural style with European standards of service and comfort.

6. How to move around and where to go:

For travel to the regions, as well as to neighboring countries, minivans are a popular and convenient mode of transportation. Prices vary according to distance but are generally affordable. Other forms of transportation to the regions include the train, buses, and rental cars (Hertz, Europe Car). The latter can be rented with or without drivers. There are also many private taxi services that will take you to anywhere in Armenia. Prices of transport are very reasonable.

Several folklore, wine and dance festivals take place in Yerevan in the summer:

?Parliament for the people?, a concert on the majestic grounds of the National Assembly of the Republic of Armenia.

?Kenats Festival?, a celebration of wine and cognac making, agricultural and musical heritage, held annually in the city centre.

Best season to visit Armenia is from April 1 to November 1, when the climate goes from mild in spring and autumn to hot in the summer.

Winter is a good time to do winter sports in Tsaghkadzor ski resort, former training ground of the Soviet Olympic Ski Team and completely renovated by a prominent Swiss company in 2004.

9. Looking into the Future:

Armenia is rapidly progressing in several industry fields and the travel industry has been identified as strategic for the economic development of the country. ATDA, the Armenian Tourism Development Agency is investing a lot to promote the country and increase number of visitors, especially in European key markets, such as UK, France, Germany, Spain and Italy.

Easy to reach with good air connections from most European countries

Safe to stay and to travel around

Reasonable prices and cost of living

Lots of fun and adventure

Source: “Travel Daily News”, 02 April 2007
Destination of the Month: April 2007
http://www.traveldailynews.com/pages/show_page/20547
(see links to each section in the right side box)