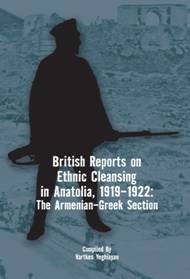 ?British Reports on Ethnic Cleansing in Anatolia, 1919-1922: The Armenian-Greek Section, is a provocative new book that clearly and vividly demonstrates that from 1919 to 1922, the Turkish Nationalists under Mustafa Kemal perpetrated an organized scheme of wholesale ethnic cleansing upon the indigenous Armenians of Asia Minor and Cilicia, and the Greeks of Pontus.

This important book, compiled by Attorney Vartkes Yeghiayan,  chronicles how the Turkish forces, after invoking a ?War of Independence,? massacred innocent civilians and looted and appropriated Armenian and Greek cathedrals, monasteries, churches, institutions, fields, orchards, stores and factories, while the victorious Allies looked away.

WW I ?ended? when the defeated Ottoman Empire signed the Mudros Armistice, which dictated categorically that the Ottomans had to renounce their empire, with the exception of Anatolia, and the Allies would have the right to occupy the Six Armenian Provinces in Asia Minor (Anatolia) in case of disturbances.

Ten days after the signing, the victorious British took charge of Constantinople and formed the Armenian-Greek Section to deal with all urgent and outstanding issues related to the Armenians and Greeks in Turkey. The victorious British also persuaded the Sultan to dissolve the Ottoman Parliament. In a Proclamation on 6 December 1918, Sultan Mohammed VI announced, ?My sorrow is profound at the mistreatment of my Armenian subjects by certain political committees acting under my government.?

The remnants of the Young Turk Regime, however, especially those who had gotten rich by the wholesale looting of Armenian and Greek assets, rejected such acts of contrition and sabotaged all efforts that would reverse their ill-begotten fortunes.

?British Reports on Ethnic Cleansing in Anatolia, 1919-1922: Minutes of the Armenian Greek Section,? is the verbatim record of 87 reports the British High Commission compiled for the use of the British Foreign Office.  These reports are yet another ?smoking gun? that confirm that the genocide of the Armenian people did not end with the end of the Great War. Kemalist forces systematically evaded the Armistice terms, and instead, implemented a scorched earth policy of a massive ethnic cleansing. The reports collected in this book cumulatively confirm without the shadow of any doubt, that the genocidal policy started by the Young Turks was brought to its merciless and bloody climax by the Nationalists.

Here is a sample of the war crimes committed by Turks that are recorded in the minutes of the A.G.S.:

?Dr. Tavitian stated that he had received news from Boghazlian, Yozgat and Caesarea to the affect that repatriated Armenians were now being accused of having murdered Turks and so were obliged to leave again.?

?At Yozgat a secret anti-Christian movement had been started, and as a result of a telegraphic order received from Mustafa Kemal Pasha, many volunteers had been enrolled.?

?Dr. Tavitian reported that the same state existed everywhere, at Everek (Caesarea) boycottage of Christians was being carried on, and the Mufti was preaching in the Mosque ordering his people not to sell to Christian. From Sivas and Samsoun many reports of outrages, cruelty and brigandage had been received, thus confirming the reports of Relief Officer in those districts.?

?Information from Sivas showed that a number of the more notorious malefactors of the time of the massacres were re-appearing; for instance, Rassim Bey, an ex-Deputy, has offered himself for election?

Turkish propagandists have recently intensified their efforts to distort these truths so clearly stated in these damning reports. One of the false narratives the Turks have been pushing is the lie that after the war ended, thousands of Armenians were allowed to return and reclaim their homes and properties. The reports gathered in this book prove otherwise. British Colonel Graves, who ran the Greek-Armenian Section, asserts in these reports that, ?the locality from which these disturbances were reported was precisely that in which returned Armenians had managed to a certain extent to resettle; one would say that since November the Turks were trying to rid themselves of these few Armenians too.?

And finally, ?This report described at length and in detail the terrible sufferings which the Armenian population had undergone through the systematic endavours of the Kemalists to completely annihilate the Armenian race by requisitioning their houses, schools, churches; their land (40%), cattle, merchandise and provisions for the needs of the Kemalist Army. Crushing taxes were being imposed upon these unfortunate people. Young Armenian Orphans were being recruited into the Turkish Labour Battalions and turned on to road mending.?

?British Reports on Ethnic Cleansing in Anatolia, 1919-1922: Minutes of the Armenian Greek Section, forms a continuum with the ?Blue Book? by Viscount Bryce that chronicled the massacres and ethnic cleansing of Armenians in 1915.

When it became clear to the British that they couldn?t neutralize Ataturk, they shut down the A.G.S., abandoned Constantinople, abandoned the Armenians and Greeks still stuck under the yoke of triumphant Turks, declared victory, and return to England ? after having secured rights to Mosul oil.

Soon after, Mustafa Kemal Ataturk became the President of the Republic and ever since, successive Turkish governments have denied that, their ?War of Independence? was nothing else but the ethnic cleansing of Greeks and Armenians from their millennia-old natural habitats.

The book is part of the Genocide Remembrance series published by CAR, the Center for Armenian Remembrance.

Books may be ordered by mail, phone or online. Books also available at your local  Armenian Bookseller.

Newer PostTurkey and the U.N.'s cover-up
Older PostA history of the Armenian Church in Singapore