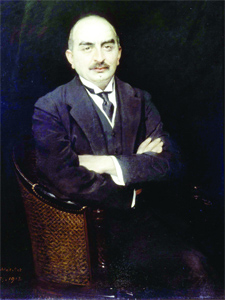 By Daniel Silva in

produces no oil yet for the past five decades oil wealth has played a key role in the development of the country, paying for library books, hospital equipment and thousands of scholarships.

The Calouste Gulbenkian Foundation, named after a Turkish-born Armenian oil tycoon who left his fortune to the country, has given out two billion euros (2.5 billion US dollars) at current prices since it was set up in 1956, a year after his death.

Money provided by the foundation has also funded the nation's top symphony orchestra, several rehabilitation centres for the handicapped and exhibition halls as well as the restoration of historical sites.

“The truth is that this foundation is the most extraordinary lucky break in the history of this country,” sociologist Antonio Barreto said last month at a ceremony marking the 50-year anniversary of the approval of the foundation's statutes.

Barreto is writing a book on the impact that the foundation's vast resources have had on , one of western Europe's poorest nations.

Gulbenkian, who made his fortune in the Middle East, lived at a hotel during the last 13 years of his life after moving in 1942 to , at the age of 73, by car with his wife, from Nazi Germany's occupied . Three years before his death he drew up a will allotting the bulk of his fortune, as well as his vast art collection, to Portugal to be used to set up a charitable foundation to thank the country for providing him with a refuge from the ravages of World War II.

The will specified that the foundation must be based in , exist in perpetuity and focus on the fields of arts, charity, education and science.

Under the care of its executors the foundation's assets have risen to just over three billion euros, equal to two percent of Portugal's gross domestic product, from the equivalent of 14 million euros when it was founded in 1956.

It is 's sixth-biggest charitable foundation by assets.

Among its holdings is oil company Partex, which has interests in , , , , and . It produces some 13.5 million barrels of oil per year.

The foundation has an annual budget for its charitable activities equal to four percent of its overall assets, which this year amounted to 113 million euros, more than the budget of some government ministries. Roughly 80 percent of the money is spent in with much of the rest earmarked for projects in the country's former colonies in .

Gulbenkian's art collection, which includes Egyptian sculptures, Chinese Qing vases and scores of gold and silver Greco-Roman coins, is on display at a Lisbon museum set in a park that shares his name which has become one of the nation's top tourist attractions since it threw open its doors in 1969.

“I think we'll never be able to thank him sufficiently for his generosity,” the president of the foundation, Rui Vilar, said in an interview published in July in literary magazine JL.

One of the first ventures which the foundation bankrolled was the creation of a network of traveling libraries which operated out of a fleet of buses, lending books to readers in the most remote parts of the country. Five years after the foundation was set up it operated 61 “library buses” alongside 156 permanent libraries at a time when was ruled by a repressive right-wing dictatorship which vastly neglected social spending.

“Few actions touched the interior of during the second half of the twentieth century as deeply as this one,” Portuguese President Anibal Cavaco Silva said at the celebrations marking the foundation's 50-year anniversary. Speaking before an audience which included all of 's living former presidents, Cavaco Silva also recalled how a Gulbenkian scholarship allowed him to do a PhD in economics in .

Born in 1869 to a family of well-to-do Armenian merchants in Scutari, now part of , Gulbenkian became a British citizen after studying petroleum engineering in and was one of the first to open the to the oil trade.