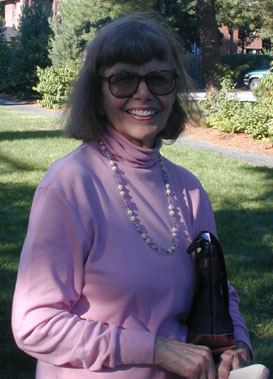 Diana Der Hovanessian does not need to be introduced. This dynamic Armenian lady has been active in American literature for more than half a century continuing writing and translating poetry. Year 2011 was very productive for her: three volumes by her have been published, both her writings and translations. Artsvi Bakhchinyan interviewed Diana at her home in Cambridge, full of literature, arts and Armenian-ness…

Q. – This year you added three new books to your publications. How many does that make?

DDH: Fifteen of my own books and ten volumes of translations.

Q. – The new translations are called Armenian Poetry of Our Time. And the book starts with Twentieth Century greats such as Daniel Varoujan, Siamanto, Tekeyan and goes on to young contemporary poets such as Vahe Arsen. You've been working on this book a long time?

Q. – Do you think of translating as part of your own work? Or do you consider it an obligation? Or is it a way of being part of great poetry you admire?

DDH: I'll answer yes to all those questions. Translating isn't as much fun as creating something new. And it has a lot of responsibilities attached. But I started because there was no contemporary anthology of Armenian poetry in English.

Some individual poems had been translated by past poets, even Henry Longfellow. But in 1896 working from literal prose translations from Armenian scholars and friends Alice Stone Blackwell produced the first edition in English of Armenian Poems. Then in 1917 for Near East Relief, and to call attention to the murder of Armenian poets in 1915 and the genocide, she added more poems and published another edition.

Q. – Alice Stone Blackwell was a great friend of Armenians and a Humanist. But she was not a poet. Do you think her translations hold up?

DDH: Of course, they are dated. She uses 18th and 19th century phrases. For instance, she begins Bedros Tourian's Little Lake: “Why dost thou lie in hushed surprise, Thou little lonely mere?”

It's too bad that Julia Ward Howe who was also active (she was president of The Friends of Armenia) did not do some of the poems. She was a known poet.

Q. – Alice Stone Blackwell's book was long out of print, I believe, was that why you started?

DDH: Before I had any book publications, but was publishing poetry in journals and newspapers, a Bulgarian poet asked me to work with him on an anthology of Bulgarian poetry. And I said: No, I can't do that…when there isn't a modern Armenian Anthology.

DDH: I started it with my father. We had already done a few translations together. The first were for a concert the Boston Pops was doing of Armenian sharagans for his friend the conductor Rouben Gregorian. And the second for a lecture on Daniel Varoujan my Hayrig was giving and wanted six poems in English for that program. I was publishing poems already in those days…and when I saw how the Varoujan turned out I sent them to one of my editors who surprised me by taking the whole batch.

DDH: No. Actually another editor of mine invited me to lunch and said she was thinking of starting a page, at the Christian Science Monitor, of International Poems and wanted me to do some Armenian.

DDH: I told her I didn't know Armenian that well. This was a long time ago. And she looked at me, and said, “Well, you're young. Learn it!”

So I did, I took every course offered at Harvard. And every course at Boston University. But, also, I had lots of help. After my father's death many friends sent me poems, or read to me. And of course, my students in Armenia would run around gathering books. And poets of course would come to read to me.

The only book I did all alone was the volume of Derian. I did with a dictionary and then had it checked. The Koutchag too. Strangely enough, I didn't find Kouchag's dialect difficult. It sounded similar to the dialect my grandmother had spoken to me. But Sayat Nova was hard. And most intimidating was Narek, even though I worked from modern Armenian translations of the old Krapar.

For the first anthology I did the Narek with the help of Hayr Oshagan a priest at Holy Trinity church in Watertown. And for the book of Narek, translations were done with Tom Samuelian….he would send a driver every morning with word for word translations done by priest, when I was in Yerevan on a Fulbright. And then when I returned to Boston the rest were sent by email.

Q. – How do you choose which poems to include in an anthology?

DDH: I think a translator often does a poem he wishes he could have written himself. Or else it is a very important poem, pivotal in some historic aspect, and must be done. For instance I had to translate Bedros Tourian for the first anthology because he was important historically…he was the first to use vernacular Armenian and write about personal themes.

Q. – You did a large volume of Charents with M. Margossian. And some of those translations were used in a recent film made in Yerevan. Is Charents one of your favorite poets?

DDH: Not when I started. During the five years I was translating Charents I would dream about him. We would have arguments in these dreams. On my first trip to Armenia I was working on that book…and met his daughters and spent a lot of time with Anahid.

Q. – And remember during another trip I took you to meet late Regina Ghazaryan, a friend of Charents who had buried some of his papers.

DDH: Oh yes, yes, yes. That was an unforgettable meeting. It is important to meet people who personally know the authors you translate. I hope they remember Regina in Armenia.

Q. – One of your new books is Dancing at the Monastery. It has a lot of prosy poems. Have you abandoned formal verse and rhyme?

DDH: No, my very newest manuscript has a larger share of sonnets and villanelles, etc.

Q. – But the brand new book, just out this month, from Cervana Barva Press, NOW I SEE IT is in shapes.

DDH: Actually those poems are just published but were written a while ago. My editor at Sheep Meadow Press would also take out any light or humorous verse, any strange shapes. But in the last few books he allowed sections of light verse. By the way, I'm a great admirer of Charents's light and satiric verses. I enjoyed translating those.

Q. – And you didn't have dreams then about arguing with him about those?

DDH: (laughing) No! But to get back to the shaped poems. In the sixteenth century English poet George Herbert did some religious poems in the shapes of altars and wings and more recently in the fifties in Brazil and Germany some artists were combining strewn words on posters, and art and calling the movement Concrete Poetry.

Q. – Tel me please a little bit about your writing habits. Do you write every day? Do you rewrite? Do you keep old versions? You did a recent program with an American poet, X. J. Kennedy called “Where Does a Poem Come From?” Did you two decide where poems come from?

DDH: We decided of course they come from poets: and they come to poets from the most unexpected places: a news item, a remembered conversation, someone else's poem you wish to answer, a dream. A lot of poems used to come to me when I was half asleep and I would get up to write them down. Now…I just ignore them.

But I do write almost every day….mostly rewriting. And I throw most of it away or my house would be filled with paper. Even more than now! I do write on paper first. Then type it into the computer and keep changing it.

What takes up most of my time is the New England Poetry Club: planning programs, finding judges for contests, introducing speakers, answering mail. I am hoping to retire from it soon. We have a good vice-president.

Q. – Well I hope the Varoujan prize and programs on translations that you started will continue.

Q. – I have one last question I think you have often been asked. Have you thought of writing a memoir? After all you have known and worked with some of the biggest names, not only in Armenian poetry but world poetry: Andrey Voznesensky, Bella Akhmadulina, Tomas Transtr?mer, Yevgeni Yevtushenko, Czes?aw Mi?osz, Seamus Heaney?