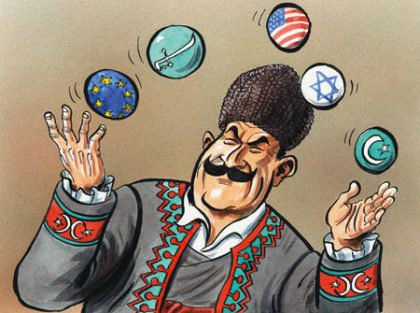 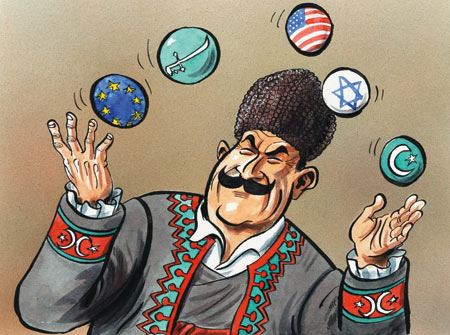 WHEN the official result of Iran?s contested presidential election was announced last month, Turkey was one of the first countries to congratulate Mahmoud Ahmadinejad. Set against the repression (and deaths) of Iranian protesters in the streets, this raised eyebrows in Europe and America. It even provoked the tired old question of whether Turkey may be turning its back on the West.

?People see only one side of this story,? complains Ahmet Davutoglu, Turkey?s foreign minister, in an interview. He does not elaborate. But Turkey?s friendship with the Islamic republic has also proved useful to the West. Its behind-the-scenes mediation was instrumental in securing the recent release of British embassy staff in Tehran. And it can play both ways. Five Iranian diplomats detained by the Americans in Iraq in 2007 were freed earlier this month at Turkey?s urging.

The ease with which Turkey juggles different worlds, be they Arab or Jewish, Muslim or European, prompted Hillary Clinton to call it an ?emerging global power?. Its strong relations with Israel matter to both countries, as became clear when they cooled during the invasion of Gaza in January. The Turks have just had a high-profile spat with China over its treatment of Xinjiang?s Uighurs, whom they regard as kinsmen. It was understandable that one of Barack Obama?s first presidential visits to a foreign country was to Turkey.

Some credit is due to Mr Davutoglu, who was a foreign-policy adviser to the prime minister, Recep Tayyip Erdogan, for seven years before becoming foreign minister in May. This spry former academic is seen as the architect of Turkey?s soft power, which blends realpolitik with a fierce pride. A pious Muslim with a moralistic bent, Mr Davutoglu has been among the most influential foreign ministers in the history of the Turkish republic.

His approach rests on two pillars. One is to have ?zero problems? with the neighbours, many of them troubled or troublesome. The other is ?strategic depth?. This calls for a Turkish zone of political, economic and cultural influence, primarily among neighbours (many of them former Ottoman dominions) in the Balkans, the south Caucasus and the Middle East.

None of this detracts from Turkey?s determination to join the European Union. Rather, it enhances its appeal as a member, says Mr Davutoglu. He seems unfazed by the hostile noises from France and Germany. Both Nicolas Sarkozy and Angela Merkel are lobbying for a ?privileged partnership? instead of full membership for Turkey. Mr Davutoglu suggests that they are merely playing to their respective electorates. ?Instead of complaining, of being angry, we should work together,? he says. For Turkey that means reviving the flagging reform process that won it the opening of EU membership talks in 2005. Mr Davutoglu is hopeful, for example, that the Greek Orthodox seminary on the island of Halki off Istanbul will soon be reopened.

But EU diplomats say none of this will let Turkey off the hook over Cyprus. Mr Davutoglu agrees that decades-old peace talks between Turkish- and Greek-Cypriot leaders should not be open-ended. A deal really needs to be struck by the end of this year. For that to happen the EU and America must tell the Greek-Cypriots to get serious (though, as EU members already, they have little incentive to help). A settlement would avert the possible train wreck in Turkey?s relations with the EU that might otherwise come in December. In theory Turkey has until then to open air- and seaports to the Greek-Cypriots, but it refuses to do this until EU trade restrictions on Turkish-controlled north Cyprus are lifted.

Might France and Turkey?s other enemies use this as an excuse to freeze the EU membership talks altogether (eight chapters have already been suspended)? Turkish leaders like to believe that Europe needs Turkey more than Turkey needs Europe. It has become even more crucial as a potential transit route for Europe-bound natural gas from energy-rich Azerbaijan and Central Asia, as well as from Iraq (and eventually Iran). Mr Davutoglu points proudly to the recent signing of an agreement between Turkey, Bulgaria, Romania, Hungary and Austria on the Nabucco pipeline that is meant to carry gas through these countries, reducing Europe?s dependence on Russia.

Yet some say that Turkey is overplaying its hand. Its energy dreams are tightly linked to its ethnic cousins in Azerbaijan. Relations between these Turkic allies took a dive in April when Turkey unveiled a draft agreement to establish diplomatic ties and reopen its border with Armenia. In a dramatic shift, Turkey even dropped its long-running precondition that Armenia must withdraw from the territories that it occupied in the 1990s after its war with Azerbaijan over the mainly Armenian enclave of Nagorno-Karabakh.

An infuriated Azerbaijan promptly threatened to turn to Russia. In June it signed a deal to sell gas to the Russians from 2010 onwards. So Turkey did another volte-face. Mr Erdogan declared that friendship with Armenia was no longer possible unless it withdrew from Nagorno-Karabakh. Mr Davutoglu insists that Turkey wants peace with Armenia. But one Western diplomat says that ?rapprochement with Armenia is on its last legs.?

This has raised the spectre of a row with Turkey?s most powerful ally, America. Armenian-Americans want Mr Obama to honour his election pledge to insist that the massacre by Ottoman forces of more than a million of their ancestors in 1915 was genocide. In a fudge in April Mr Obama said that he had not changed his views on the matter; yet he spoke only of the Medz Yeghern (?great calamity? in Armenian). He did not want to torpedo Turkish-Armenian rapprochement by using the G-word.

Turkey?s strategic location had once again proven decisive. As American forces withdraw from Iraq, Turkey is seeking to avert a looming conflict between the Arabs and the Kurds, especially over the disputed city of Kirkuk. Turkey urged Iraq?s Sunnis not to boycott elections in 2005. Mr Davutoglu is again lobbying to ensure that all Iraqi groups take part in the parliamentary election in January 2010. ?We have excellent relations with the United States at every level,? he says. And, notes a Western official, ?when it comes to Turkey and Armenia, Turkey wins every time.?