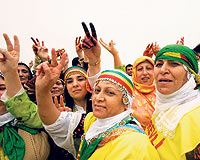 We are far from understanding the Armenian question, yet can we be close to solving the Kurdish question?

To answer this, we need to look at how the Kurdish question emerged in the first place. The same state ?problem solving? mentality was in work for both the Armenian and Kurdish questions. Population exchanges, forceful evacuations and atrocities directed at civilians. Nothing has changed over all these years. The same ?problem solving? mentality created the very problem it was trying to solve. The Kurdish question was very simple to solve in the beginning. There was a marginal armed group (the PKK, or Kurdistan Workers' Party) which used to carry out sporadic attacks against security forces. Most Kurds did not like them. But many Kurds also wanted to be recognized as Kurds; be able to preserve and live their culture, speak their language and so on. At that time, the Turkish official stance — dictated by the military, basically — was very rigid on the Kurdish question. According to this ?understanding,? there were no Kurds, there was no separate Kurdish language. Kurds were ?mountain Turks.? They were called ?Kurds? because of the sound they make when they walk on snow: ?Kart,? or ?Kurt.? For those of you who do not know the difference between Kurdish and Turkish, they are about as similar as Chinese and English. So basically, the official understanding of the Kurdish question was a joke. If we did not know the sufferings of Kurds as a result of this ?unwise? approach, we could even say that the Turkish state has a dry sense of humor because of the creation of this ?mountain Turk? concept. But it was not a joke, and this understanding of the question caused a serious human tragedy in Anatolia once again.

The treatment of Kurdish prisoners in the Diyarbakır prison after the 1980 military coup was a turning point. The torture and ill treatment of Kurdish inmates in this prison was beyond human imagination. The Diyarbakır prison was like a Nazi concentration camp. The inmates suffered so much that upon release almost all of them went to the mountains to join the ranks of the PKK. People were imprisoned even for just expressing peaceful ideas about the Kurdish problem. It would not be an exaggeration to say that the phenomenon of the Diyarbakır prison created the PKK we know today. With these ?angry? militants in its ranks, the PKK increased the number of its attacks dramatically. The Turkish security apparatus started to seek new ways to handle this ?new phenomenon? and (not surprisingly, of course) came up with the idea of using more violence. They created the concept of ?fighting terrorists with their own methods.? Kurdish villages were set on fire; 3,000 villages were destroyed. The monster created by the Turkish deep state, JİTEM (an illegal gendarmerie unit), claimed more than 17,000 lives. People were abducted in broad daylight, and their dead bodies later thrown onto streets, under bridges and into wells. No person ever turned up alive after being taken by JITEM. The terror they created, like the terror in the Diyarbakır prison, sent more and more militants to the PKK.

Stuck between a rock and hard place

This is one side of the coin. On the other side, there is the PKK. It was first established as a Marxist-Leninist organization and turned into an extremely nationalist, violent structure. Many times, poor Kurdish villagers were persecuted simultaneously by security forces and the PKK, both of which accused villagers of aiding and abetting ?the other? one. The PKK killed many Kurds. The PKK tortured and killed its own militants. The PKK used terrorist attacks, including suicide bombings, exploding bombs in the most crowded streets, and so on. The PKK was ruled by an iron fist. To be honest, for many years I thought the worst thing that could ever happen to the Kurds would be to live under the authority of the PKK, which has the potential of becoming one of the worst dictatorships the world has ever seen.

Today we are at a point where Turkish state officers mention the ?Kurdish question? openly, and both the PKK and the Turkish state are about to explain their ?road maps? for a solution to the problem. In the past, there were occasions when we all felt so close to the solution. Each time, the ?Turkish deep state? and the ?deep PKK? found a way to sabotage the whole process. Today, because of the Ergenekon case, we are in a more advantageous situation. At least one ?party? has fewer options to sabotage the ?process.? But what is this process? Does it include an open confrontation with our past? Does it include both Turks and Kurds questioning taboos? Will it lead us to confront older and deeper wounds in our past, like the Armenian tragedy, which was created by Turks and Kurds together?

My observation is that no one in Turkey is ready for this kind of confrontation. Instead, everyone waits for ?the other? to accept their responsibility without sacrificing anything. I strongly believe that if we do not confront this ugly past, if we do not open our hearts to the human suffering, no ?solution? will be long lasting. If Kurds do not open their hearts to PKK members who were tortured and killed by the PKK or the Turkish victims of terror created by this organization, likewise if Turks fail to understand the pain and suffering of Kurdish villagers who were wrested from their very roots, we cannot solve anything. This is the first level. At the second level, we need a deeper understanding. Both Turks and Kurds need to confront the Armenian tragedy, which they created together. If Kurds start to understand this tragedy, they will get rid of the illusion that they are the only people who ever suffered in Anatolia. If they understand the Armenian tragedy, and how Kurds were used by the deep state then, they would be much more humble, much less nationalist. We need to question many things. Every answer will lead to other questions. This is a process full of pain. Is anyone ready for that much deep questioning? I don't think so. Unless we engage this kind of questioning, we will inevitably end up with shallow ?solutions? which will not be long lasting.

If we had understood the Armenian tragedy, we would not have become mired in the Kurdish question. Unless we question our past, some people will try to restore the ?deep state? once again, some people will try to re-establish the PKK sometime in the future. Everything depends on severing the moral bases of these terrible structures, and this depends on an open confrontation with everything in the past. Can we start?