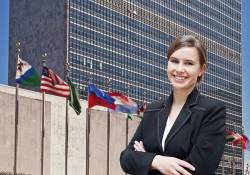 NEW YORK ? A recent spate of diplomatic conflicts around the globe has been linked to the hiring of an attractive tour guide by the United Nations, sources at the international organization's headquarters reported Monday.

Distractions caused by the cute, perky guide, 23-year-old Northwestern University graduate Rachel Proxmire, have been blamed for escalating tensions between Turkey and Armenia, Israel and Jordan, and the United States and North Korea, as well as for civil unrest in Honduras, Iran, and China.

“It's embarrassing,” Turkish diplomat Hamit Ozan said. “One minute, I'm calmly explaining to the General Assembly our position on the alleged Armenian genocide, and the next, I see Rachel come in with a tour group and I get all flustered trying to think of something to say to get her to notice me. Before I know it, I've inadvertently acknowledged crimes my country has been denying for decades, and it's all over the news.”

In March of this year, when Proxmire began her employment with the U.N., officials at the organization immediately noticed a lightened mood in the assembly hall, with many delegates smiling more and humming contentedly to themselves. Within a few weeks, though, the number and intensity of geopolitical disputes began to increase.

“She was?wow,” Saudi delegate Ahmad Khouri said. “The first time I saw her, I was in the middle of speaking out on the deplorable treatment of the Palestinian people, and suddenly she caught my eye. I just completely lost my train of thought. She has that creamy, smooth skin?and that laugh! It's like music.”

Perhaps most significantly, North Korea's increasingly hostile global relations have been traced to the tour guide, who was wearing a skirt when the Security Council placed sanctions on the country for a nuclear test it carried out in May.

“The North Korean representative was so busy staring at her that he just nodded in agreement when the council condemned his nation's weapons program and voted to freeze its assets,” Eritrean diplomat Berihu Alazar said.
“Then the guys from South Korea and Japan started razzing him about it, trying to look cool in front of her. He turned bright red all of a sudden and threatened to wipe everybody off the face of the earth.”

“Whatever. Like any of those losers have a chance with Rachel,” Alazar continued.

Proxmire's influence on international policy has not been entirely negative. In April, when it came to light that she was concerned about global warming, seven separate resolutions to limit carbon emissions were passed by an overwhelming majority. And earlier this month, delegates from all nations strengthened their ties by working jointly on an initiative to surprise the spritely blonde with cupcakes on her birthday.

“I'm completely smitten,” said U.S. delegate Tony Gilbertson, smiling as he turned his gaze toward Proxmire. “I'd do anything for her.”

Gilbertson later missed a crucial vote on a resolution that would have allowed the U.S. military to pursue Taliban militants into Pakistan, because he was in his office practicing the song he wrote for Rachel on his acoustic guitar.

According to U.N. sources, no diplomat has spoken directly with Proxmire at any length. The closest contact reportedly occurred when the French delegate asked her if he could borrow a pen, then ran away before she could respond.

“The member nations of this organization send their representatives here to make the world a better, safer place. We can no longer endure the consequences of?oh God, there she is! How do I look? How do I look?”

At press time, Proxmire remained oblivious to the worldwide discord she was sowing.

“Everyone here is so nice,” she said. “They may be too busy to talk, but they'll go out of their way to hold the door for me, even if they have to run across the room. And if someone on the tour has a question I can't answer, there are usually a few delegates tagging along who are eager to chime in.”

“All my friends wish they had this job,” Proxmire

Newer PostThe ugly truth about the Kurdish question — the Armenian question!?
Older PostCan you put a price on knowledge?