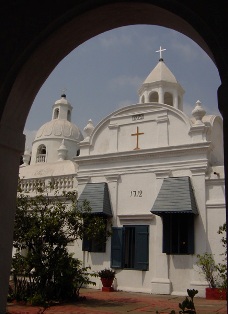 The articles of Ms. Hermineh Adamyan have recently been brought to my attention regarding the Armenians in Madras and the forthcoming celebrations in 2012 for the 300th  anniversary of the St. Mary?s Armenian Church, Chennai , as well as the other articles written by her. I feel it appropriate that some factual corrections need to be addressed.

First and foremost I think it should be pointed out that the most outstanding historian of Armenians in India has always been Mesrovb Seth.  It is to his books and articles that anyone who is researching the Armenians in India turns to.  Seth spent 40 years of his life painstakingly researching, travelling, noting, transcribing and collating vast quantities of notes that make up the only book today of its kind ?Armenians in India from the Earliest Times to the Present Day? which he published in 1937. Having published in 1897 a taster for this book, the ?History of the Armenians in India? it was the precursor to what is constantly referred to today.  He did not have the comfort of instant and readily available research on the internet, he laboriously had to transcribe enormous amounts of text from documents in repositories, institutions and libraries.  The 21st century joys of digital photography were not conceived even in the wildest of dreams of his time, for Seth it was the old fashioned way of stone rubbings of many of the historical memorials that he recorded and only after he had travelled for weeks by horse and cart to the various Armenian locations around India that once held these people in their glory days under the rule of the British that the majority of Armenians were grateful to do.

Unfortunately for Ms. Adamyan the trappings of the 21st century facilities have led her to write inconsistently and inaccurately and perhaps it is a good lesson to all who write about history that the best place to look about your subject is in the very same repositories, institutions and libraries that the likes of Seth used.  Seth took 40 years to write his story and that was done having lived, worked, breathed and slept in India for that time; Ms. Adamyan has been in India less than 6 months, and having made a few clicks on a mouse, the reader of her article is meant to believe that she is some kind of authority.  You will not find the likes of true historians and Armenian researchers such Richard Hovannisian, Professor of Armenian and Near Eastern History at the University of California, Los Angeles, Prof. Sebouh Aslanian, Dr. Peter Cowe, Professor of Armenian Language and Culture at the University of California, Los Angeles, Dr. Bhaswati Bhattacharya lecturer, at Erasmus University or  Dr. Omar Khalidi of the Aga Khan Program for Islamic Architecture at the Massachusetts Institute of Technology,  write an article without citing the sources used.  Where were the source citations for Ms. Adamyan?s article?  In fact had Ms. Adamyan taken her time and reviewed the book written by Deacon Tigran Baghumyan in 2007 (to which she had plenty of access) ?Armenian Clergymen Buried in West Bengal?, it would have guided her to make less errors in her article, it is indeed a good modern example of how to use source citations.

It may be that Ms. Adamyan wrote the original article in Armenian and it was later translated into English and thus it lost some of its original details. But it is the responsibility of the author to check the translation of anything before releasing it into the public arena to ensure there is no loss of factual content.

It should be mentioned that The Armenian Church was built in Black Town not White Town there is documentary evidence and maps to this effect dated 1710 showing the burial ground on which the original church was built.

It is indeed a revelation to know that: ? there is also an Armenian Church in the nearby village of Mylapore??.? As past Pastor of the Armenian Churches in India, had I thought for a moment during my four years in India, that there was indeed an Armenian Church in Mylapore I would have brought it to the attention of the Church Wardens and the Committee so that it could be incorporated into the Church renovation program.  Ms. Adamyan?s clumsy statement unwittingly changes the course of history for the Armenian people of India.  For the record, there is not and never was an Armenian church at Mylapore, there is however a Roman Catholic Church that contains some Armenian scripts.  I have visited almost every Christian church in Chennai all of which were built between the years 1500 and 1800 and I noted that there are Armenian graves in many of them, but this does not mean that it is an Armenian Church.  There is no concrete evidence to suggest that St. Thomas?s Church was built by an Armenian, as erroneously written by Ms. Adamyan.  If she would care to provide such evidence I would happily stand corrected.

Ms. Adamyan appears to have a fixation in changing historically known names; ones that Mesrovb Seth had long before found, researched   and noted from historical documents.  She states Shahamir Shaharmirian, when in fact he was simply Agah Shameer, Petros Voskan should be Petrus Woskan, St. Astvatzatzin as the Armenian Church has actually always been referred to and is registered as ?St. Mary?s Armenian Church?, meanwhile Edvart Samuel Moorat (correct named Edward) would be turning in his grave at the thought of being called ?a prominent Armenian?.  His Moorat family and their cousins the Raphael family actually went to great lengths to dissociate themselves from any of the Armenians in Madras and had Ms. Adamyan researched thoroughly she would have discovered this for herself.  The buying and selling of the Pantheon was a means to an end for the Moorat?s, they migrated to the England and became prominent and important members of society.  Personal papers indicate that they had no wish to be associated with the Armenians in any way.  To add salt to the injury, I believe the most unprofessional part of the article was the way she addressed the head of the church. He is and always has been referred to as His Holiness Karekin II Supreme Patriarch and Catholicos of all Armenians yet Ms. Adamyan has no respect for the way in which he is addressed and referred to him as Garegin II and did not care to mention his full title.  Perhaps she, who works for the Armenian Church, at least she should visit the official Armenian Church website to remind herself of how to address the Head of the Armenian Church.

Ms. Adamyan continues to mislead the reader again by stating: ?One of the more prominent historical structures in the city today is the multi-arched bridge spanning the River Aydar. It was built in 1725 and is still in use today.?  The whole of Chennai must be laughing into their Lassi! Still in use today? Unable to withstand the weight of modern traffic it was demolished in the 1960?s and replaced with a stronger concrete structure.

Ms. Adamyan will gain cheap popularity from her ill-written article but at the same time the burden of small historical and inaccurate changes will fall on her shoulders purely from her lack of knowledge and checking of simple facts.  She continues rather glibly that ?St. Astvatzatzin is in decent condition???  I should like to point out that St. Mary?s Armenian Church is in more than a ?decent condition?.  During my Pastorship in India between 2005 and 2009, it was subject to a major and sympathetic renovation and rebuilt during 2007 and 2008 the likes of which few churches see.  It is now in an outstanding condition.

Referring now to Ms. Adamyan?s previous 2 part article ?Another World: Armenians in Far Off India?, I note that she felt: ?For a moment it seemed that we had wound up in some western hotel with all the modern amenities. A place where a teacher could concentrate on her work and the staff would take care of all other mundane issues.?  As past Pastor of India and Manager of the Armenian College I am greatly disappointed at her arrogant way of expressing her own self importance in her newly appointed teaching position, and the implication that staff in India are there to serve her and her ?mundane issues?.  Furthermore, her description and inclusion of photographs of her accommodation ? her ?western hotel room? fails to acknowledge how the comfortable accommodation at the school came about. A cursory nod of acknowledgement to the past management would have shown she wasn?t quite the self-centred character the article reflects her to be.

I would like to make a point here that as Pastor and Manager of the Armenian College (2005-2009), I oversaw all the major rebuilding and renovation that took place during that period, both for the churches and the historical Armenian College and Philanthropic Academy, which have operated and run side by side  for over two centuries.  The current management and staff at the school, find themselves in a very comfortable position in terms of accommodation and church renovation due to the intensity and pressure that I maintained on the various building contractors involved.  I and all the other Past Pastors of the Armenians in India should not be forgotten nor pushed aside, we have all played a part to ensure the continuation of the Armenian Church in India, and I hope there will be many more to do so in the future.

I would strongly suggest to Ms. Adamyan that before she writes any more articles that she goes and check archives and not rely solely on the internet.

Read in the Armenians in India section Hermineh Adamyan's reply.