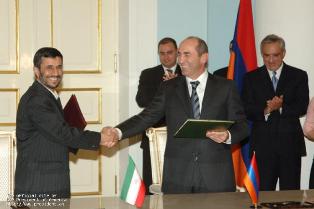 It goes without saying that those who deny any genocide must be condemned, not honored. There should be no exceptions and no double standards. Yet, periodically, one comes across bizarre situations when those who engage in genocide denial are rewarded rather than ostracized by none other than those who condemn Holocaust denial.
Last month, the President of Iran, Mahmoud Ahmadinejad, traveled to Armenia to discuss bilateral trade and review major projects being undertaken by the two countries. After meeting with Armenia?s leaders, the Iranian President visited Yerevan State University (YSU) where he gave a brief talk to students and answered their questions. He carefully sidestepped the issue of the Armenian Genocide, by simply stating that Iran condemns all crimes against humanity. Following the established protocol for all visiting heads of state, YSU officials dutifully handed Ahmadinejad an honorary doctorate and a gold medal. Apparently, no one at the University bothered to make an independent assessment of whether the visiting dignitary deserved to be honored or not. In October 2006, when the President of Romania visited Yerevan, he too was presented an honorary doctorate and a gold medal by YSU, even after he told university students that he was not prepared to acknowledge the Armenian Genocide in order not to ruin his country?s friendly relations with Turkey.

Last month, after YSU hosted Ahmadinejad, various Jewish groups condemned the Armenian University for honoring the Iranian President, a notorious Holocaust denier.
Rima Varzhapetyan, the President of the Jewish community of Armenia, was the first to criticize YSU. Contrary to some American Jewish groups, she is fully entitled to do so, as she does not practice a double standard. Indeed, Ms. Varzhapetyan properly and even-handedly condemns all genocide and Holocaust deniers. Hence, she has earned the moral right to criticize such wrongdoing by her Armenian countrymen.

Other Jewish groups, however, have abdicated that right. Both the American Jewish Committee and the Anti-Defamation League (ADL) issued statements last week condemning YSU for honoring Ahmadinejad. It is highly improper and unethical for the AJC to criticize YSU, given AJC?s refusal to acknowledge the Armenian Genocide and its collaboration with Turkey?s denialist regime. This is an egregious example of a double standard. Those who live in glass houses should not throw stones at others. AJC?s leaders have lost the moral standing to lecture anyone else about the denial of the Holocaust. Therefore, their criticism of YSU cannot be taken seriously.

Even more dubious is the position of Abraham Foxman, ADL?s National Director. After refusing to acknowledge the Armenian Genocide for many years, Foxman was recently forced by influential and righteous Boston-area Jewish leaders to issue a statement that included a reference to the Armenian Genocide. Even more surprising is the fact that Foxman dared to criticize YSU for honoring Ahmadinejad, yet he himself presented Recep Tayyip Erdogan, the Prime Minister of Turkey and a denier of the Armenian Genocide, ADL?s “Courage to Care Award” back in 2005 at the organization?s headquarters in New York.

It is noteworthy that some members of the Jewish community were quick to criticize Foxman?s actions. Molly Freeman, a reader from Berkeley, California, sent a letter to the editor of The Forward, harshly condemned the ADL for presenting an award to Erdogan.

In her letter titled, ?ADL acts hypocritically in honoring Turkish PM,” Freeman wrote: “So egregious is the ADL award to a head of a state that denies responsibility for the annihilation of 1.5 million of its own Armenian citizens that I believe the ADL is contributing to antisemitism. What could be more hypocritical and useful to anti-Jewish bigotry than honoring a denier of genocide? The ADL is not making the world safe for Jews; rather it is contributing to our insecurity and to the discontinuity of our moral tradition. I wish that the ADL would take seriously the words of Hillel: What is hateful to you, do not do to your neighbor. This is the whole Torah; all the rest is commentary. In the case of the award to Erdogan, the ADL is actually denying a cornerstone of rabbinic law as it dishonors its neighbors, the Armenians. By rewarding Erdogan, it is doing something it never would countenance to be done to Jews.”

A similarly shameful double standard was exhibited by yet another Jewish group, the American Jewish Congress, which honored Erdogan in 2004 with its “Profiles in Courage” award in New York.

Two Armenian American newspapers, the Armenian Weekly and the Armenian Reporter, in their editorials last week rightly criticized YSU for giving an award to Ahmadinejad. However, both newspapers should have also condemned the ADL and the American Jewish Congress for honoring Turkey?s denialist Prime Minister.

Condemning the denial of the Holocaust should not be a one-way street. There should not be a double standard. The Armenian Weekly?s editorial correctly pointed out that Ahmadinejad and Erdogan have made similar calls for more research to find out whether these atrocities have in fact occurred ? a call that is shamefully supported by the ADL and others in the case of the Armenian Genocide, but not the Holocaust. Just as Armenian-American organizations never question the Holocaust, Jewish groups should never question the facts of the Armenian Genocide.

Jews and Armenians and everyone else should apply the same standard in dealing with genocide and Holocaust denial. No one should get away with denying either tragedy and no group should honor anyone who dishonors the memory of the victims of such crimes against humanity.