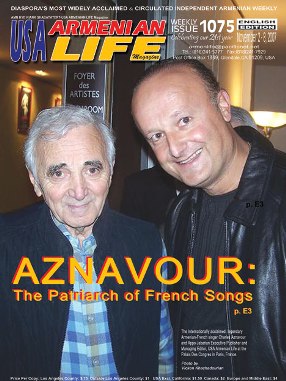 The much anticipated concert day for thousands of Aznavour fans in Paris has finally arrived on October 19, 2007.

Several months before the festive night with Aznavour, thousands of fans from France, and hundreds more from the United States, Russia, even far away Japan and other countries were already flocking the websites and the box office of the theatre to secure their place under the Sun, Aznavour's sun.

This writer, who has been listening to his songs since his childhood in Lebanon, now was an Armenian-Lebanese-American invitee of an “Ambassador of Aznavour” Vicken Khachadourian of Northern California. (Vicken is a phenomenal Aznavour fan worthy of a separate tribute article.)

It was under thunderous and uninterrupted applauds by nearly 4,000 fans that the legendary Armenian-French singer Aznavour made his triumphant entry onto the stage of the Grand Amphitheatre at the world-famous Palais Des Congres in Paris France.

The ever youthful Aznavour at 83 years of age, widely known as “The Patriarch of French Songs,” once again captured the hearts and minds of his fans through an artistic intensity that is perpetually enhanced by dynamism, reminiscent of the Aznavour of the 1970's and 1980's.

His voice's precise yet sensitive fluctuation proved to be the natural continuation of the same Aznavour that came to Paris and proclaimed: “At the age of 18 ? I was certain to conquer Life (“A Dix-huit-ans ? j' ?t? certain de conqu?rir la vie.”)

In addition, he has since been conquering one heart at a time and keeping busy so much so that, he has overcome the barriers of aging with an ?lan of his own. He has defied with much resolve all the challenges that pound the door of any octogenarian.

And rightfully so, just before the start of his much anticipated performance that night, Aznavour quipped that the document for his funeral arrangement, prepared by the funeral company, will end up being drowned in dust, because the Patriarch of French songs has no intention to depart anytime soon. And one can tell, from his resilient tenacity, that this legendary artist means business!

So, he sings “Non je n'ai pas oubli?” (“No, I haven't forgotten”) his promise to last. In return, the audience did not forget him and continued to cherish the vintage singer with the same reverence and awe now, as in yesteryears. And what materializes is a synergetic trade-off between Aznavour's undying thirst for electrifying rendering and the audience's ever-growing appreciation of his performance.

“D?sormais “? (“From now on”) that's the way it will be! Why? Because, “La jeunesse, … “Il faut boire jusqu' ? l'hivresse sa jeunesse.”” (“The Youthfulness, we must 'drink' his youth till drunkenness”). Aznavour the singer, the storyteller, the composer, was a communion giver to a very receptive audience.

All this was celebrated with solemn gratitude expressed so beautifully through “Ave Maria.” His performance of this classic illustrated how Aznavour experiences the essence of his Providential journey to the altar of universal compassion and communion. It is from this altar that he passed on the torch of vivacity and accumulated wisdom via a deeply touching duo with Katia, his much talented daughter, who serves as a bridge for this and coming generations that seek answers to the questions of Life! “Je voyage” they both do! And they did it with much rapport and spiritual depth.

The atmosphere of affinity between the two generations of performing artists reaches its apex under the tunderous applauds by the same captive audience. Aznavour, left alone after her daughter Katia's departure from the stage, continues to maintain the ambiance electrified and magnetized. That's not an easy task to accomplish for an artist who has navigated through 83 springs or winters.

The transforming sceneries of “tableaux aznavouriens” are nothing less than the parading of distinct themes of songs that permeate the wholesome being of each and every listener. “Les Musiciens” (“The musicians”), “Tsiganes” (“Gypsies”), “La Boh?me” (“The Bohemian”), “Le ciel Du Nord” (“The Northern Sky”), “Hier Encore” (“Still Yesterday”).

Awestruck by his multifaceted artistic personna, one must confide that writing about a towering artist like Aznavour has never been easy. The more the artist becomes legendary, the harder it is for any talented writer to do adequate justice in writing about him. If one ventures to write about the individual messages of the several songs that have earned unmistaken international acclaim, he would surely need to fill volumes. Et encore! (That too would hardly be enough).

Even a recent autobiography by Aznavour himself is markedly insufficient to transmit the extent of his omnipresence as an artist and a French man, and as the Armenian son of an Armenian Genocide survivor. And yet he has remained healthy despite the horrible past.

Why healthy? Because he is not guided by hatred but by conditional tolerance and forgiveness toward Turkey, the murderer of his ancestral nation, the Armenians, provided that its sons make amends to the victims of the first crime against humanity at the dawn of the 20th century. In his autobiography, Aznavour presents a song titled “A letter to my Turkish friend” and he underlines: “My brother, if you decide to extract the thorn that I have in my heart, the thorn that you have in your foot will disappear by itself, then us, you and I, would become liberated and brothers.”

Luckily for Aznavour and his dispersed fellow compatriots, and thanks to his valiant efforts and gallant contributions to world civilization, the world now remembers with much affinity and empathy the pains and sufferings of his people. The Armenian Experience is not “A Forgotten Genocide.”

How can one overlook the parade of public statements of solidarity by several Grand Dames and Monsieurs of France, the United States and other countries of the civilized world?

Couple of years ago, during official celebrations of Aznavour's 80th birthday in Paris, and in the presence of President and Mrs. Jacques Chirac, the much acclaimed French singer Ms. Line Renaud revisited with emotion Aznavour's song “Hier encore j'avais 20 ans,” (“Yesterday when I was 20”) by telling him, “Tonight, you are 20, ? you traverse our lives as a history of love that never ends? Tonight, you are 20, and you give a voice to those who don't have it ? from New York to Paris, you have not forgotten the soul of Armenia, this people that is still injured ? Charles, my friend for life!”

And in Armenia, during the state visit in September of 2006, of the French presidential entourage headed by Chirac and accompanied by Aznavour and a contingent of famous French artists and other personalities, Chirac paid tribute by characterizing him as the “grand French, the grand Armenian and a towering artist.”

And during the public celebration of “France-Armenia Year of Friendship” super event in Yerevan, the Armenian capital, the immensely popular French actor Jean Claude Brillaly said: “Today is the celebration of Love!”

Why is that all these good things are happening for Aznavour and his French and Armenian peoples? Because he is constantly guided by that inner light and heartwarming fire that brought him to Paris from Marseille at his 18 years of age.

In a solemn humility, with an expression that is emblematic of his down-to-earth persona, Aznavour utters his farewell words: “Vous avez ?t? une publique avec beaucoup de talent.” (“You've been a much talented audience”! The curtain comes down but the show goes on in our hearts and minds.

And Aznavour continues his artistic conquests in Paris, Los Angeles, New York, Brussels, Rome, Athens, Beirut, Moscow, Tokyo and many others corners of our Planet Village. And he does it with much talent for composing, singing and using several languages, presenting a bonanza of bonuses for any connoisseur of his music, lyrics and artistic message.

Appo Jabarian is the Executive Publisher / Managing Editor of “USA Armenian Life” Magazine. He could be reached at the following e-mail.

Newer PostHolocaust denial in the White House
Older PostGenocide and Holocaust deniers must be condemned, not honored