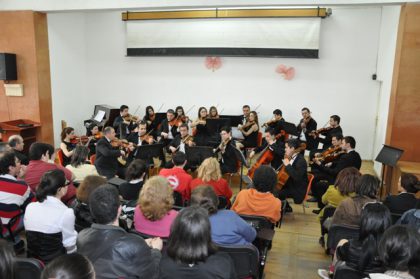 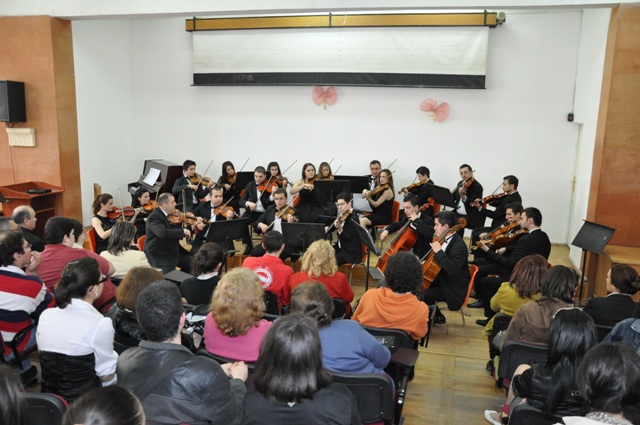 Under the patronage of Fridtjof Nansen Foundation, the Gomidas Chamber Orchestra of the Armenian Youth Association (AYA) of AGBU?s Aleppo Chapter, played in Armenia works of Khachatourian, Gomidas and a selection of classic works by Handel, Vivaldi and Bach during the first week of May 2010.

The Orchestra's conductor Wanes Moubayed was extremely happy with the results of the orchestra as the volunteering orchestra members, versed in Armenian, Syrian and Islamic musical traditions, did well and met the expectations of the demanding audiences in Armenia.

This was perhaps a rare example of a diaspora based orchestra visiting the homeland and performing on stages in the cities of Vanadzor, Gyumri, and Goris, besides the capital Yerevan.

Fridtjof Nansen Foundation, based in Yerevan, works on preserving the Armenian cultural heritage. Fridtjof Nansen himself, a Nobel Prize winner in Peace, was a Norwegian researcher and scientist, who worked through his position as High Commissioner for Refugees (established by the League of Nations) to support small nations subjected to deportation and massacres.

He directed relief for millions of Russians dying in the famine between 1921 and 1922. Then he moved to shelter the Greek refugees suffered by the Turks in Asia Minor and lately he was involved in assisting refugees, who escaped the Ottoman Genocide of the Armenians in 1915. In Yerevan, a foundation was named after his death to thank Nansen for what he did for the Armenian people.

Felix Bakhchinian, Fridtjof Nansen Foundation's president in Yerevan, believes that it is important for Armenians to know what Nansen did for them, “Our aim is to spread awareness on how a European citizen has saved the lives of many people in the past. Those with no nationality were granted a Nansen Passport recognized by more than 50 countries,” he says. “We are extremely happy to arrange a tour of concerts by Syria-based Gomidas Orchestra aiming at introducing Nansen to the Armenian audiences through these concerts,” Bakhchinian explained.

There are many examples of Armenian individuals who have been active in assisting their fellow compatriots. Gulbenkian and Manougian are just two names who, besides their successful business activities, dedicated a large portion of their wealth to improve the life of Armenians all around the world. The deeds of Nansen, however are worth additional applause, because he had no blood connection with the peoples he helped. His motives were distinguishingly humanitarian.

Children and teenagers may raise questions at early age related to their identity, but real issues come up at adult age.

In the case of Armenians, there are more Armenians outside the borders of modern time Armenia than inside. Those outside the motherland have different ways of expressing their attachment to the country, while those inside have different concerns related to everyday life, that can sometimes shadow their aspirations.

For many Armenians scattered around the world the dream of owning a house, a land or any kind of property in Armenia is the ultimate way of expressing relationship towards the homeland.

For a relatively young country that is independent since 1991, much is needed to normalize life and bring it to European standards. The Armenian population has suffered a lot in the past two decades. It has endured the Soviet regime for 70 years that turned Armenia into a provincial part of a big Empire. The earthquake of 1988, the terrible energy shortages during the first years of the independence (due to the Turkish blockade), war forced on Armenia by Azerbaijan on the Karabakh issue, all made life difficult for those who had to struggle for building a new state. Turkey and Azerbaijan continue to make life difficult for Armenians.

Despite all difficulties, Armenia is supported by a large diapora that has always stood by its side. Hayastan All Armenian Fund has been a good example of financial assistance provided to rehabilitate Armenia's infrastructure. Dozens of Foundations and well-to-do individuals have been involved in improving life in Armenia. Sometimes there is a kind of healthy competition between the involved parties regarding who is working harder for the welfare of Armenia.

On the other hand, I believe that time has come now for Armenians inside Armenia to realize that Diaspora Armenians have their own problems and difficulties. The majority of them are not leading a luxurious happy life. Besides the financial problems they face also acute identity issues. They need to work hard to preserve their identity, language, traditions, etc. There is no other way for remaining Armenian.

If the battle of identity is lost, there would be no foundations or individuals in Diaspora that would be readily available to assist the Armenians in the motherland.

Turkey between the Arabs and Israel: A balance factor