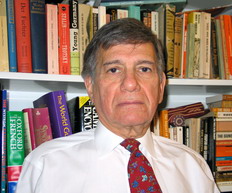 President Obama ? I love saying those words ? has momentarily united the world. Almost. Among the exceptions, though barely noticed by the mainstream media, is the estrangement of Turkey and Israel, previously staunch allies in the turbulent Middle East.

At first blush, this alliance may seem counterintuitive, but in fact it makes good strategic sense for both countries. Israel gets a warm working relationship with one of the largest Muslim countries in the world, while enriching Israel's all-important industrial-military complex. Less than two months ago, for instance, came the news of a deal worth $140-million to Israeli firms to upgrade Turkey's air force. In the hard-boiled, realpolitik terms that determine Israel's strategies, it's a no-brainer. Almost.

In return, Turkey gets military, economic and diplomatic benefits. But it also gets something less tangible, something that matters deeply for reasons hard for outsiders to grasp. As part of the Faustian bargain between the two countries, a succession of Israeli governments of all stripes has adamantly refused to recognize that in 1915 the Turkish government was responsible for launching a genocide against its Armenian minority. Some 1.5-million Armenian women, men and children were successfully killed.

I should make clear that this Israeli position is not held casually. On the contrary. Over the years Israelis, with a few notably courageous exceptions, have actually worked against attempts to safeguard the memory of the Armenian genocide. (The bible on this issue is the excellent book by an Israeli, Yair Auron, called The Banality of Denial: Israel and the Armenian Genocide, 2003.)

For many, this may well be a pretty esoteric sidebar to the world's many crises. But readers need to understand that every Turkish government for almost a century now has passionately denied that a genocide took place at all. Yet the vast majority of disinterested scholars of genocide have publicly affirmed that it was indeed a genocide, one of the small number in the 20th century (with the Holocaust and Rwanda) that have incontestably met the definition set down in the UN's 1948 Genocide Convention.

But the Israeli-Turkish bargain goes well beyond Israel. Not only is Israel, of all the unlikely states in the world, a genocide denier, but also many established Jewish organizations in other countries, especially the United States, have followed suit. In the United States, those who argue that denying the Holocaust is psychologically tantamount to a second holocaust have taken the lead in pressuring presidents and Congress against recognizing the reality of 1915. Resolutions calling for recognition are regularly pushed by American-Armenians and their many supporters. Jewish groups regularly lead the opposition. Some believe that members of these groups in fact understand perfectly well the rights and wrongs of the case. But a mindset that backs any and all Israeli government initiatives trumps all else. And successfully. Repeated attempts in Congress to pass this resolution has failed, even though the list of nations that now recognizes the Armenian genocide has grown steadily and, thanks to Stephen Harper, now includes Canada.

It is this rather unseemly, if not unholy, Israeli-Turkish deal that has been among the many victims of the latest Israeli attack on Gaza. Whether the Israelis anticipated it or not, the Turkish government turned against its erstwhile ally with a vengeance, pulling few punches. Turkish Prime Minister Recep Erdogan accused Israel of “perpetrating inhuman actions which would bring it to self-destruction. Allah will sooner or later punish those who transgress the rights of innocents.” Mr. Erdogan described Israel's attack on Gaza as “savagery” and a “crime against humanity.”

Israel formally described this language as “unacceptable” and certain Israeli media outlets have raised the stakes. The Jerusalem Post editorialized that given Turkey's record of killing tens of thousands of Kurds in northern Iraq, “we're not convinced that Turkey has earned the right to lecture Israelis about human rights.” Israel's deputy foreign minister was even more pointed: “Erdogan says that genocide is taking place in Gaza. We [Israel] will then recognize the Armenian-related events as genocide.” Suddenly, genocide turns into a geopolitical pawn.

It isn't easy to choose a winner in the cynicism stakes here. Here's what one Turkish columnist, Barcin Yinanc, shrewdly wrote: “When April comes, I can imagine the [Turkish] government instructing its Ambassador to Israel to mobilize the Israeli government to stop the Armenian initiatives in the U.S. Congress. I can hear some Israelis telling the Turkish Ambassador to go talk to Hamas to lobby the Congress.”

I'm guessing some readers work on the na?ve assumption that an event is deemed genocidal based on the facts of the case. Silly you. In the real world, you call it genocide if it bolsters your interests. If it doesn't, it's not. It's actually the same story as with preventing genocide.

What happens now? Candidate Obama twice pledged that he would recognize the Armenian claim of genocide. But so had candidate George W. Bush eight years earlier, until he was elected and faced the Turkish/Jewish lobby. Armenian-Americans and their backers are already pressing Mr. Obama to fulfill his pledge. With the Turkish-Israeli alliance deeply strained, the position of the leading Jewish organizations is very much in question this time. Whatever the outcome, be sure that politics, not genocide, will be the decisive factor.

Gerald Caplan, author of The Betrayal of Africa, writes frequently on issues related to genocide.

Gerald Lewis (Gerry) Caplan, PhD (born 1938) is a Canadian academic, public policy analyst, commentator and political activist. He has had a varied career in academia, as a political organizer for the New Democratic Party, in advocacy around education, broadcasting and African affairs and as a commentator in various Canadian media.

He is an authority on genocide and genocide prevention an internationally recognized expert on the Rwanda genocide. (from Widipedia)

Newer PostShould Turkey apologize to the Armenians?
Older PostThe ARF: Building a legacy of service to the nation