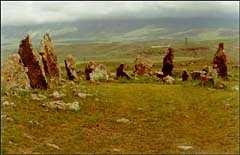 , located in the on the Black Sea between and , contains some of the most significant cultural examples of sacred geometry, as well as other remarkable prehistoric structures, such as the “stonehenge” at Karahundj. Rick Ney explores their cultural significance.

They sit like soldiers on a hill, huddled in formation. The 204 stones near Sissian have been ascribed with mystical, fertility and cosmic powers, but rarely have ancient monuments caused such a sensation in astronomical circles.

These simple stones stretched out along the crest of a hill overlooking the Sissian River challenge the very dating of early astronomy and the answer to the question, “Who were the first astronomers?” If proven true, a current controversial dating of the stones at Karahundj predate 's Stonehenge, they predate the Babylonian's claim to being the first astronomers, and they confirm what some people already suspect: that is the birthplace of the zodiac, and perhaps the beginning of navigation and the concept of time.

Pretty amazing claim for a group of rough-cut stones that have been almost ignored for centuries. Not so to Elma Parsamian and Paris Herouni, both who have taken a keen interest in the complex about 5 kilometers from Sissian. Parsamian, an astral-physicist at the Byurakan Observatory and Internationally renowned lecturer on Astronomical History, and Herouni, the director of the first optical-radio telescope, have both crusaded to bring the stones at Karahundj to the attention of the astronomical world, and they are about to succeed. Astronomers from Europe and the are showing increasing interest in the complex, and several expeditions have already taken place, confirming much of what these two conjecture.

It should be no surprise to anyone who knows something of 's history that astronomy is such an important part of the national character. Sun symbols, signs of the zodiac, and ancient calendars predominated in the region while the rest of the world was just coming alive, culturally speaking. and were still untamed wilderness areas when the first cosmic symbols began appearing on the side of the Geghama Mountain Range around 7000 BC. At Metsamor (ca 5000 BC), one of the oldest observatories in the world can be found. It sits on the southern edge of the excavated city, a promontory of red volcanic rocks that juts out like the mast of a great ship into the heavens. Between 2800 and 2500 BCE at least three observatory platforms were carved from the rocks. The Metsamor observatory is an open book of ancient astronomy and sacred geometry. For the average visitor the carvings are indecipherable messages. With Elma Parsamian, the first to unlock the secrets of the Metsamor observatory as a guide, the world of the first astronomers comes alive.

“The Metsamorians were a trade culture,” Parsamian explains. “For trade, you have to have astronomy, to know how to navigate.” The numerous inscriptions found at Metsamor puzzled excavators, as indecipherable as they were elaborate. Hundreds of small circular bowls were carved on the rock surfaces, connected by thin troughs or indented lines. But one stood out. It is an odd shaped design that was a mystery to the excavators of the site, until Professor Parsamian discovered it was a key component to the large observatory complex. By taking a modern compass and placing it on the carving, Parsamian found that it pointed due North, South and East. It was one of the first compasses used in Ancient times.

Another carving on the platforms shows four stars inside a trapezium. The imaginary end point of a line dissecting the trapezium matches the location of star which gave rise to Egyptian, Babylonian and ancient Armenian religious worship.

Sketch the locations of the Jupiter moons over several nights and you're repeating an experiment Galileo did in 1610. Chart a star over several years and you repeat an experiment the Metsamorians did almost 5000 years ago. By using the trapezium carving and a 5000 year stellar calendar, Parsamian discovered that the primary star which matched the coordinates of its end point was the star Sirius, the brightest star in our galaxy.

“Sirius is most probably the star worshipped by the ancient inhabitants of Metsamor,” Parsamian explains. “Between 2800-2600 BCE Sirius could have been observed from Metsamor in the rising rays of the sun. It is possible that, like the ancient Egyptians, the inhabitants of Metsamor related the first appearance of Sirius with the opening of the year.”

Those wanting to plot the same event from Metsamor will have to wait a while. Sirius now appears in the winter sky, while the inhabitants of Metsamor observed it in the summer. (Because of the earth's rotation within the rotation of the Milky Way galaxy, stars change their positions over time. In another 4000 years or so Sirius will again appear as it is plotted on the Metsamor stellar map).

The Metsamorians also left behind a calendar divided into twelve months, and made allowances for the leap year. Like the Egyptian calendar which had 365 days, every four years the Metsamorians had to shift Sirius' rising from one day of the month to the next.

“There is so much I found in 1966,” Parsamian adds, “and so much we do not know. We believe they worshipped the star Sirius, but how? I like to imagine there was a procession of people holding lights. These carved holes throughout the complex may have been filled with oil and lit. Just imagine what it must have looked like with all those little fires going all over the steps of the observatory. Like a little constellation down on earth.”

Parsamian has a special regard for Metsamor, since it was she who uncovered many of the mysteries of the inscriptions on the observatory, answers which explained other finds uncovered at the excavation site. “When you walk over this ancient place, you can use your imagination to complete the picture. I love to visit Metsamor since I feel I am returning to the ancients.”

Read the complete article at the following link (PDF format).