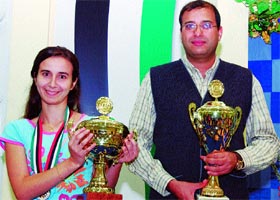 Mouradian, who turns 21 this month, told the reporter: “I like these trophies. They look so nice and attractive and I am getting used to collecting them“. She successfully defended the title she had won last year in (19-29 December 2003). This year, in nine rounds, Mouradian drew four successive games ? the sixth, seventh, eighth and ninth rounds for a total of seven points.

Giving a hint about the course of her games this year she said: “The advantage for me was because I won my opening rounds. This gave me the liberty to experiment a bit later during the tournament and then settle for a draw, if I found the game slipping out of my control“.

What about next year?

Knarik Mouradian has her own plans for next year?s Arab Chess Championship (Women?s section): “I will definitely return next year. And I am also confident I can win the title and set a record for being the only woman to win the title three times in a row“, she asserted.

The trophies and cash prizes were presented by Sultan Saqr Al Suwaidi, secretary general of the General Authority of Youth and Sports Welfare in the UAE.

Time limit for both of events (men's and women's) was 90 minutes for all moves, with added 30 seconds a fixed extra time for every move (Fischer's System). The tournament played according to the Swiss System with 9 rounds.