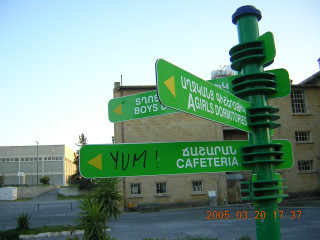 On Sunday 20th March 2005 Azad-Hye visited the Melkonian Educational Institute in Nicosia (Cyprus), which is under the threat of closure at the end of this academic year (see photo gallery).

About 120 students (mainly from , , and other countries) are attending the lessons, almost certain that they will need to find other places to continue their studies next year. Some are lucky enough to be at the graduation year, but others need to do arrangements for smooth transition to other schools, without excluding the prospect of discontinuing their studies due to financial difficulties.

The feeling of lose is predominant among the students. No new students were admitted in at the beginning of the current school year. The current students and thousand of graduates will soon be deprived of their beloved school. It is not certain whether their collective effort will change the course of events.

We met several citizens of , who all expressed their concern about the fate of the school, marking it as a sad day for all Cypriots. Actually it is incomprehensive why AGBU insists to close a school that can grant its graduates high school certificates, recognized on the European Union level, now that has joined the .

The premises of the Institute, especially the main two buildings are part of 's architectural heritage. Together with the surrounding parks they are chief landmarks in the capital city.

Two of Melkonian's students approached and provided us with a written text about the closure of their school. They signed the text with the nicknames Ardziv and Paze. Here are the main parts of what they wrote (translated from Armenian to English):

“The Fall of 79 years old school: For many years the Melkonian Educational Institute has played an irreplaceable role in the Armenian Diaspora cultural life. As a unique educational center, it has provided numerous pupils with the necessary means for their educational progress and development.

Only indifferent people and those who are totally overwhelmed with financial considerations could take the decision for its closure. Their excuses about the big financial loses of the Institute are baseless, as, from its first day this school was a product of benevolence and kindness, not a mean for business profit.

The suggestion of opening Melkonian Institute in is completely ridiculous, because there are enough schools in to cover the needs for national education there.

In the past, foreign invaders had ordered the closure of our schools, but what we see today the Armenian hands are doing it, as if it is not enough the closure of the other Diaspora schools such as Murad-Raphaelian, etc.

In our opinion the closure of the school will have tragic consequences on the Diaspora cultural life. It will endanger the struggle for keeping our identity in the Middle East and . This is why we all consider the day that the decision for the closure of the school was taken (16th March) as a black day in our history. We will continue to protest and oppose to those who prefer to see the doors of the Melkonian Institute closed forever.