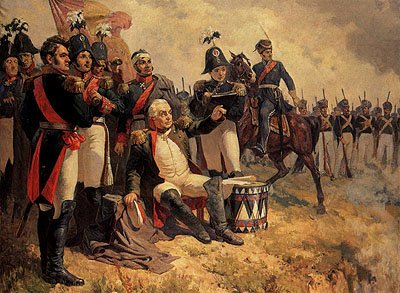 Armenian heroes of the 1812 Patriotic War

The 200th anniversary of the Battle of Borodino is widely celebrated in Russia. Themed conferences, round table discussions and thematic displays are held. Three books with the biographies of the brilliant Russian strategists – Kutuzov, Barclay de Tolly and Bagration – who led the Russian army in the war against Napoleon were published.

“There was a thunder of two thousand cannons and two hundred thousand guns that shook the ground beneath our feet. It was spewing death with such hellish speed that any rescue seemed impossible ” – Count Leo Tolstoy famously described the battle in his novel “War and Peace“, bringing out the true people's war with the feats of high-ranking noble officers and ordinary soldiers, Cossacks and unprecedented large forces of militia.

Among those who fought against the French and shed blood on the field of Borodino, were also Armenians. Generals Paul Airapetov and Theodore Akhverdov (the author or the historical work “Description of the 1812 War”), captain Dmitri Akhsharumov, Prince Vasili Bebutov, Colonel David Delianov, brother-officers Ivan, David and Alexander Abamelik, Captain Zoan Firalov and Commander Nikita Abramov.

Today the portraits of these heroes can be seen in the series of 333 portraits displayed at the War Gallery of Hermitage Museum. The glorified military commanders of the 1812 Patriotic War look down on us with their handsome and brave faces “full of military courage”, as Alexander Pushkin wrote about them.

Among them is a portrait of Valerian Madatov (1782-1829). The lucky warlike hussar and the admiration of everyone, was born in the Chanahchi (Ave


taranots) settlement in Karabakh, not far from Shushi. At the age of 15 he arrived in Russia. As an ambitious young man he joined the military service in St. Petersburg. The first time when he got under fire was in General Bagration's regiment during the 1806-1812 Russian-Turkish War. At Rassevatom, 26 year old young man with two squadrons of hussars routed four thousand cavalry corps of Khosrow Pasha. During that battle he was awarded the golden sword which carries the inscription “For Bravery“. At the Chaushkoy village Madatov was promoted as Major and received St. George Cross for his second brave action, when, with the squadron of hussars, he cut into the outnumbered enemy column, scattered them and took their weapon.


Madatov was among the first ones who started to fight back the French when the Russian Army was retreating in the Boroding battle. There was no other Colonel in the Russian Army who worked his way up the ranks so successfully, who had so many orders of the highest esteem and a golden sword studded with diamonds. Madatov turned to the soldiers and said, “Hussars, look, I'm riding on the enemy. If you fall behind, I'll be captured or die”. And without waiting for an answer he rushed forward. In the bloody battle they got their chance to restore the honor of Russian arms.

For eleven long years since 1816 Madatov commanded the troops in Karabakh and neighboring Sheki and Shirvan Khanates helping General Aleksey Yermolov, the Caucasian Corps commander-in-chief, to subdue the Chechens and the Akushins. In 1826, a large Persian army of Abbas Mirza invaded the Russian territory. The Russian-Persian war started. Lieutenant General Madatov (who was promoted to this high rank by the new chief commander I. Paskevitch) with almost tenfold smaller forces, with two battalions, four light guns and with a team of Karabakh riders, encountered the Persians at Shamhor river, who were rapidly advancing to Tiflis (modern Tbilisi). On the 3rd of September 1826 he defeated them. That glorious military campaign ended by the occupation of Shusha fortress and the signing of Turkmenchay agreement. According to the agreement the Eastern part of Armenia, between the Khura and Araks rivers, was transferred to Russia's control.

Soon Madatov appeared in the Balkans with another war against the Ottomans. There he lead the hussars' division against the heavily fortified walls of the Shumla fortress, a battle that was last in his life. He died of longstanding illness, not of the severe suffering wound, on 7 September 1829. Many times he avoided death on the battlefields. The Turks opened the gates of the fortress and allowed the respectable hero, who was always merciful to the enemy and to the civilian population, to be buried in the cemetery near the Armenian Church. Later, by the will of the Russian Tsar Nicholas I, his remains were transported to Russia and reburied at Alexander Nevsky Monastery in St. Petersburg, next to the tombs of other Russian prominent figures.

In May 2007, a monument made by the famous sculptor Georgiy Frangulyan was inaugurated in the old Bulgarian town of Shumen.

A recent poll showed that almost a third of the Russians (31%) do not know against whom the Russians were fighting in the war of 1812. The percentage is even bigger in the circles of the youth.

In 1837, Lermontov romanticized the war in a famous poem, but very few know that the prototype that the poet used was a Russian general of Armenian origin Paul Melikov (Boghos Melikyants), who proved himself a hero and lost his right arm at the terrible Battle at Borodino. His stories inspired Lermontov for writing a poem.

Armenians gave Russia many volunteers, brave fighters and officers. Prince Madatov has been one of such heroes who came into prominence during the Patriotic War of 1812 and the 1826 -1829 Russian – Persian and  Russian – Turkish military campaigns.

130 years later, two of his Karabakh compatriots Marshals Hovhanes Bagramyan and Hamazasp Babajanyan, 64 other Armenian Generals, one Navy Admiral (I. Isakov), one Air Marshal (S. Khudyakov) and thousands of Armenian warriors followed him and demonstrated heroism on the World War II battlefields.

It is said that heroes remain alive if they are remembered. Two centuries passed and the anniversary of Borodino Battle with all its heroes is still causing admiration and reverence and serves as an effective reminder and stimulus for patriotic enthusiasm for young people in Russia and Armenia. It is milestone in the resurgence of both nations.