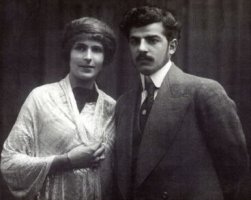 If history is a map, then the history of many poets is a small island far in the middle of an oceanic mass, visible yet mostly uncharted territory. I knew that for the columns this month, I not only had to read the poems of the poets who perished during the Genocide, but it was also necessary and essential that I find out as much as I can about their backgrounds, biographies, the details of their private lives or the letters quoted which were signed with their names.

But the more I researched and read, the more I realized that I would never find out what I truly wanted to know. I surprised myself of what interested me  –  odd details and questions that could never be answered. Yes, of course, few but important facts of their lives are available. But not the details that one would find in a memoir or in the unopened diary of a loved one.

For instance, the more I read about Roupen Sevag  –  the little that there is documented  –  the more I wondered things such as: what was the song this man hummed to himself in the face of fear, and ultimately, when he died, what could have been found in the pockets of his coat? Would one find an unfinished poem, or merely a stamp never used, never mailed out to a friend a continent away?

Roupen Sevag  –  the pen name of Roupen Chilingirian  –  was born in 1885 in Silivri and was arrested in April of 1915 and killed in August of that same year. He was a poet, writer and physician. An eyewitness account retells the horrific torture and deaths of Roupen Sevag along with Daniel Varoujan and others.

Just as I imagine what would have been found in Sevag's pockets, I speculate about what types of poems he may have written if he had lived. One of his poems, “Whisper of Love” translated by Berge Turabian was featured on the Armenian Poetry Project last year and is exemplary of a young poet writing on love during the beginning of the twentieth century.

They sailed away, loaded with mystery and secrets,
The ships of my love sailed away from my gaze,
Their prows high, facing dark and distant shores,
And their sails drunken with the warm sunset breeze.
And I saw how, like ancient and beautiful goddesses,
In their immaculate sanctity, pure as snow,
Wings high, like pilgrims to unknown lands,
The swans of my love silently glided away.
It is evening. I am watching the immense flow,
The sea-breeze is quietly recounting the happy memories
And the boundless waters are rising with an ineffable mystery.
In front of me, gravel and foam are kissing on the shore,
I am looking at the distant horizon beyond which
The ships of my love and the swans of my dreams have silently glided away.
They sailed away, loaded with mystery and secrets…

Sevag writes with many familiar symbols such as shores, sunset, swans, or the horizon. They are metaphors that have reoccurred in poetry and poems often. The unique or more refreshing elements in the poem seem to be those, which are less traditional and predictable, such as the sudden shorter line and turn in “It is evening.” Also, in the line “In front of me, gravel and foam are kissing on the shore” Sevag personifies gravel and foam as lovers. These moments help to take us away from the ship that sails off into the sunset and closer to the speaker's world where the elements of nature take on a life of their own at the close of day.

Who knows what would have become of Roupen Sevag if his life had lasted long after those brief 30 years. Perhaps his poems would have continued to lament on the shores of love or, depending on his experiences, the verse could have suddenly featured crows instead of swans or lightning storms instead of sunsets. After all, we'll never know what filled his pockets  –  if there were poems that were lost. There could have been the beginnings of odes to his sweetheart or small lyrics about how his life was saved one night as the sand shifted below his feet.

“Whisper of Love,” translated by Berge Turabian, from the Armenian Poetry Project, July 9, 2007. Reprinted with permission.

Roupen Sevag and wife Yani in Lausanne about 1913