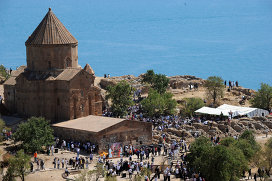 For more than a day now the devastating earthquake in Eastern Turkey has been in the focus of the global news agenda. By Monday evening, 279 people have been reported dead and hundreds more are wounded. It is only natural that it is people?s tragedy that draws attention and sympathy across the world.

Despite all this, I find it a bit strange that to this hour Google News yields contradictory reports from little known sources about the fate of the superb ancient Armenian monuments in the Province of Van, including its gem ? the 10th century Surb Khach, or Holy Cross, Cathedral on the island of Akhtamar in the Lake Van.  After all, the land that has been rocked, once again, by a major earthquake is known to millions of Armenians around the world as Western Armenia ? the territory, from which Armenians were driven during the genocide of 1915, which to this date remains the bone of contention in Turkey?s international relations. Its remaining landmarks, such as the ruins of the ancient Armenian capital of Ani or the fascinating Holy Cross Cathedral on the Lake Van, are not only the distant Wailing Walls of the Armenian people. They are ? or at least should be – world heritage sites, dear to all cultured people regardless of their ethnicity or religion.

Turkey understands this. As reluctantly and ambiguously as one can, it recognized the importance of Surb Khach by giving it a state-funded restoration several years ago, after decades of vandalism and neglect, and reopening it ? not as a church, but as a museum.

I am not saying that at this hour the fate of the medieval monuments should take priority to human lives. Of course not. But tomorrow, or the day after, I ? and I am sure, many others ? would like to know, how these great churches and city walls survived this earthquake, just one of many in their centuries-old existence. Caring about them appears to be the least political and most face saving way for Turkey to mend fences not only with Armenians, but with millions of other Christians and nations who have demonstrated concern for the events of 1915.

By a sheer coincidence ? or, some would say, providentially – on the same day that Eastern Turkey/Western Armenia was shaken by the earthquake, in Moscow, the Catholicos of the Armenian Apostolic Church, Karekin II, in the presence of Armenia?s President Serge Sargsyan and Russian church and state officials, blessed the crosses for another Surb Khach ? a new cathedral of the Armenian Apostolic Church in Russia, which imitates the forms of the Holy Cross Cathedral on the Lake Van. (see photos here) The impressive cathedral in north central Moscow, which has now been finished in terms of overall construction (interior decoration remains to be done) will be  the biggest Armenian church outside of Armenia and the center of the territorially largest diocese of the Armenian Apostolic Church worldwide. Given the millions-strong Armenian diaspora in Russia, numerically it is probably also one of the largest. 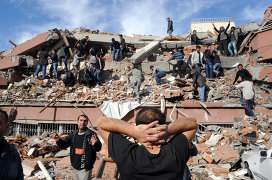 Today, during the talks between Russian President Dmitry Medvedev and Armenian President Serge Sargsyan, they called Turkey?s President Abdullah Gul to express their condolences. Given the absence of diplomatic relations and the closed border between Armenia and Turkey ? the border going now through the earthquake zone ? it is not a small thing.

When all those dead in this earthquake are mourned and laid to rest, when all the wounded are taken care of, the world will want to know about the status of the great remains of the centuries of Armenian presence in Eastern Turkey. By behaving one way or another in that regard, Turkey can either make a step towards healing the old wounds or stir them once again.