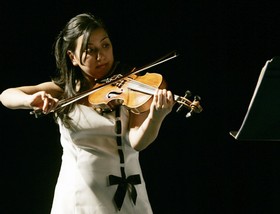 Watching Angela Amirian perform at an evening of classical music at the Sultan Bin Ali Al Owais Cultural Centre, , recently, one was amazed at the versatility of this instrument that has its ancestry in the rhubarb of the and the viola of Renaissance Italy.

The violin is one of the few instruments that provide the same musical satiety when played solo or as part of an orchestra. It is equally poignant expressing the intricacies of pathos and the heights of true happiness. Even today the best violins are hand-made.

What is it made of?

Did you know that apart from fine horsehair strings, a variety of fine timber is used in the making of a violin? Spruce for its belly, bass bar and the sound post; maple for the back, neck and the bridge; ebony for the fingerboard, the peg-box and rosewood for the pegs and buttons.

Playing the violin is a highly complex activity. It has to be held horizontally between the collarbone and the lower jaw in such a manner as to have its belly facing the audience. It is usually held with the left hand, slightly bent.

The clarity of sound depends on the rapidity with which the finger is pressed down or released from the strings. The right hand holds the bow which glides over the strings of the instrument.

In the hands of an accomplished artist, the instrument has the power to take the listener to dizzying heights of ecstasy. There are many schools in the UAE where violin classes are offered.