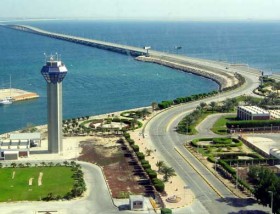 Up ahead I could see two circular towers ? and they were identical except for one crucial detail.  One of these two 1970s-style buildings on the King Fahd Causeway was flying the Bahraini flag, while the other proudly displayed Saudi Arabian colours.

I jumped out of the taxi, took the lift to the top of ?s tower, and was rewarded with beautiful views on both sides.
In the distance on one side was the Saudi Arabian city of , while back where I came from, the rose above the shining blue water of the Gulf.

But although was linked physically to mainland , I had already discovered it had a character all of its own that made it a worthwhile weekend trip from the UAE.
Earlier that day, the first stop on my whirlwind tour of the island, after flying in the previous evening, was fort or Qala?at Al Bahrain.

This site, which sits beside the capital , is thought to have first been occupied in 2800BC, although the oldest visible parts are dated at 2000BC.

Some of the remains have been carefully restored, while others are more recently excavated and are just as the archaeologists left them.

In between the fort and the sea was an abundance of palm trees while beside were tiny fields carefully tended by kneeling farmers.

After leaving the fort, my taxi driver took me for the trip along the causeway before we visited a craft centre that tries to keep ?s history alive.

Here there were ladies in traditional clothing weaving baskets, men creating beautiful model ships from wood and potters hard at work on their spinning wheels. A short drive away was a slightly more authentic pottery centre in the where more master craftsmen were showing off their skills.

We walked outside and saw a gigantic kiln, one half of which was open to show the newly-fired vases that would soon be going on sale.

At the other end of the kiln, the entrance was being cemented over, ready for another firing. Just a few metres away from the kiln was a giant mound ? one of the more than 100,000 burial mounds spread across . In places, they gave the landscape an almost lunar character.

There are mounds known as the Royal Tombs just outside A?ali that are as much as 15 metres high and 45 metres wide.

Back in the car, we headed further south to explore more of the island?s interior. At first, the roads were tree-lined, but later the vegetation and much of the development gave way to wide open spaces ? and the island?s highest peak, Jebel Al Dukhan. It only stretches 134 metres into the sky but its flat, dusty surroundings seemed to magnify its size.
Further west, the Formula One motor racing circuit was visible through the haze, while tiny oil wells, their machinery moving rhythmically in the sunlight, dotted the landscape.

My tour of the island?s countryside over, we drove north to explore ?s urban centres, which lie on the of the island.

We passed through the sleepy but pleasant before heading into itself.

There are many ambitious new developments coming on stream in , but the city is certainly not another .
However, in parts this gives it a charming small-town feel and its less frenetic pace ? and lighter traffic levels ? can be a welcome change. Indeed means ?sleeping place?.

There are big shopping malls towards the west of the city, where I stayed in the youth hostel, but the true heart of the city lies in the fascinating souqs.

Here, western tourists rub shoulders with expatriates from the Indian subcontinent and Bahrainis in their traditional dress. Groups of men relax over coffee in the caf?s.
Cross over the bridge into Muharraq, which lies close to the impressive , and things are if anything even more interesting.

I spent a wonderful couple of hours walking through the quiet backstreets of the town before heading to one of the caf?s to rest my legs before the short flight back to the UAE.

Where to stay : For those on a modest budget, the Al Juffair Youth Hostel (+973-727-170) provides good value accommodation. I paid 20 Bahraini Dinars (Dh195) for a room with ensuite facilities for two nights. It is best to reserve a place. The hostel can be reached by bus from .

Visa procedures: EU, Canadian, Australian and citizens can buy a tourist visa on arrival at the airport for 5 Bahraini Dinars (Dh49).

Getting around: To travel round the island, you can hire a taxi, but these can be quite expensive, so consider going on one of the half-day tours. A good choice is Ghadeer Tours (+973-412-571) who offer a half-day trip for 11 Bahraini Dinars (Dh107) of Bahrain fort, the craft centre and the village of A?ali.

Newer Post'Unknown To No One'
Older Post'Viken Couture' in Abu Dhabi