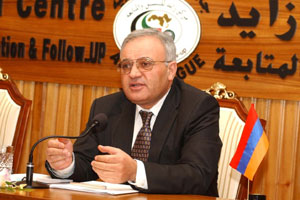 AZAD-HYE (8 October 2004): Today's Dubai – Yerevan biweekly flight of the Armenian Airlines will take on board the first Emirates Cultural Delegation on a visit to Armenia. The Delegation is headed by Eid Al Faraj, senior administrator at the Cultural Foundation (Abu Dhabi) and two artists: pianist Sultan Al Khatib and oud player Sultan Salem Khalifa Al Qubaisi (nicknamed as ?the two Sultans?), who will perform on the stages of the Armenian capital from 9-15th October 2004.

The two performers have their own international musical project, demonstrated for the first time in the Cultural Foundation a year ago, amid public appraisal. They played classical masterpieces using a unique combination of piano (western instrument) and oud (eastern instrument). is the next stop on their international tour.

It is worth mentioning that oud player Sultan Al Qubaisi was taught classical music by his co-performer Sultan Al Khatib, achieving thus the status of the only player in the Arab World who combines knowledge of two instruments (piano and oud), from two completely different musical heritages.

The trip is organized though the efforts of the Armenian Cultural Association of and in cooperation with the Embassy of Armenia and the UAE Ministry of Information and Culture.

Review of the cultural relations between and UAE:

On 20th April 2002 President Robert Kocharian arrived in the UAE for a three day state visit, the first of its kind by an Armenian President to a Gulf Country. During this visit he held talks with the President of the UAE Sheikh Zayed bin Sultan Al Nahyan. UAE and signed seven agreements, covering various areas including culture and education.

During the week, an exhibition of ancient Armenian carpets, bronze sculptures, paintings, classical music and films were showcased. The exhibits were from the Armenian State Museum of Folk Arts.