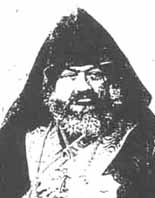 The spirit of religious tolerance, as we have said, has had a peculiar effect in assisting Armenians to pass from their own to other denominations of the Christian faith. We will say nothing of conversions to Islamism, which are brought about mainly by the direct action of the public authorities. The descendants of such converts belong entirely to Islamism, and can no longer be considered as Armenians. They contribute their share in swelling the existing Turkish and Kurdish populations of the Ottoman empire.

The oldest rupture with the Armenian Church is due to the sect of the Armeno-Greeks (Hai-horom), whose separation can be traced back to the period of Byzantine rule. Formerly, this sect was very numerous; but at the present time its numbers are reduced to a mere trifle  –  to 10.000 or thereabouts. Scattered through the dioceses of Akn, Ismit, and Keghy, they retain the memory of their origin, and their elders still hold converse in the language of their forefathers. The ancient Armeno-Greeks, who became incorporated and blended by degrees with the Greek element, no longer display, in their external aspect or their religious tenets, any of the characteristics of their original nationality.

It cannot be apprehended for a moment that the Russian domination in the Caucasus has succeeded in forming an Armeno-Russian community, with a view to its absorption into their Church; but the attempts which Pravoslavism has made in that direction have been far from successful, except in one village in the Caucasus, and in a few families in the chief cities, who have allowed themselves to be won over.

The proselytism of the Roman Catholic Church has been more successful. She has succeeded in forming an independent community, which has been recognized by the Turkish government. This success owes itself to the political ascendancy of the Catholic powers and to the pecuniary aid of the Propaganda. It has also been countenanced in a special degree by the tactics of the Roman Curia, which has given its sanction to the use, by the converts, of the Armenian rite, with certain modifications. The earliest missionaries, however, had conceived the idea of introducing the Latin rituals, translated into Armenian; but they were obliged to give up the project on account of the strenuous opposition which it excited. The Roman Curia then resorted to another expedient. It published a special edition of the Armenian rituals, with the text very much altered, though retaining the semblance of the model. This expedient was scarcely very successful; and in the end it decided to foist on the original text arbitrary and far-fetched interpretations. It has succeeded to that extent.

The remnants of the earliest conversions, which can be traced back to the 16th Century, led their lives in scattered communities in Cilicia and in Armenia, until, at the beginning of the 18th Century, there was inaugurated, at Constantinople, a vigorous campaign of proselytization, which split up the nation into two parties. The congregations of the Mkhitarists and the Antonians, and the establishment at that period of an hierarchic see, gave a powerful impetus to the movement. It made so great an advance that the Armeno-Catholics, with the approval of the sultan, ended by forming themselves in Turkey into a nationality (millet), and establishing a special hierarchy. In Russia the Armeno-Catholics have formed a community of their own, but it is subject to the control of the Roman Catholic bishop of Saratoff. There are also to be reckoned  a certain number in Galicia and in Hungary; these, however, have no relations with their co-religionists in the East. The total number of Armeno-Catholics scattered throughout the world may be estimated at about 200.000. The towns in the Turkish empire which contain the largest number of their adherents are Constantinople, Angora, Aleppo, Mardin, and Khotordjoor; they are also to be found in numbers at Akhalzikha in the Caucasus and at Lemberg in Galicia.

The Armeno-Protestant community is of recent formation. The claim, advanced by some of their members, that they are the descendants of the Thondracians or Paulicians of Armenia is purely chimerical. It has been proved that these ancient sects left no descendants in the East. We are under no misapprehension in saying that Oriental Protestantism was introduced solely by American missionaries. These latter, encouraged by the success of the Armeno-Catholics, have endeavoured to form a special nationality (millet) in Turkey, with the rights pertaining to it. Their total, which approximates about 80.000 souls, is made up of a certain number of small congregations scattered throughout the empire. The mass of them are collected chiefly round their institutions at Kharpoot, Aintab, and Merzifoon, which have been founded by American missionary efforts and are supported by them. Their profession of faith is based on the principles of the Evangelical Church; a few of their number belong to the Episcopal and Baptist persuasions. The Armeno-Protestants are under the administration of the American missionaries, and exist, in a measure, on the funds procured for them by the latter. We should also draw attention to the existence, in the Caucasus, of a body of a few thousands of Armenian Protestants; but as they have no status of their own, all distinction between them and foreign communities is lost.

Finally, it should be added that Catholics and Protestants manage their affairs in Turkey under internal regulations of their own, which have never been confirmed by the Ottoman government.?