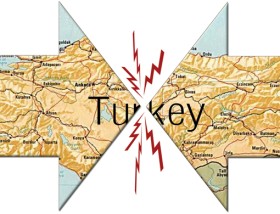 The European Union is in danger of making a mistake of immense strategic importance: instead of welcoming into its ranks it is rebuffing it.

At the very moment when the West is in a mood of profound alienation from the Arab and Muslim world – based largely on ignorance prejudice and mutual incomprehension – is turning its back on the one country uniquely able to serve as a bridge between East and West.

At the very moment when the Middle East is experiencing crises and wars of unprecedented gravity which threaten to overspill into neighbouring countries and into Europe itself Europe has failed to grasp that Turkey could provide a key to regional security.

heir to the and a founding member of Nato is a major regional power – dynamic yet traditional; secular yet Muslim; democratic yet militarily powerful. Its ties with are centuries old. As its Foreign Minister Abdullah Gul likes to recall sent its first diplomatic envoy to in 1495 while chose as the site of its very first foreign embassy in the 16th century.

Today could play a key role in stabilising and in helping to mediate the Arab-Israeli conflict since it is on good terms with both sides. It has again demonstrated its commitment to regional security by sending a thousand soldiers to help keep the peace in southern .

On November 9 the European Commission is due to publish a report on its negotiations with over the past year and on the progress has made in carrying out the reforms has demanded. There are grave fears that this crucial report which will set the tone of future relations between the EU and will be negative.

Instead of acknowledging 's very considerable efforts to meet European norms and adopt European values – instead of looking forward to 's great potential contribution to Europe's security and stability – it is likely to emphasise areas of continued disagreement demand still more concessions from and put the blame on for the current stalemate.

So bad is the situation that many observers believe relations between and are heading for a breakdown. If these fears are proved correct – if the commission's report is indeed hard on – European diplomacy will have suffered a considerable defeat.

The EU's grudging attitude towards Turkish membership has already created an anti-European backlash in while at the same time encouraging reactionary right-wing forces in Europe especially in and to call for a suspension of negotiations with .

One major subject of disagreement concerns the Mediterranean divided between Greeks and Turks. The Greek part – the – is an EU member state while the Turkish northern part has not been recognised as a separate republic and suffers from a commercial boycott.

The EU is demanding that open its ports and airports to the of which is obliged to do under its customs agreement with the EU. But is refusing to comply until the EU ends its commercial boycott of the Turkish part of the island – which the EU promised to do so but has so far not done. The outstanding issue therefore would seem to be one of reciprocity. Fairness and natural justice would suggest that the Turks have a point.

Moreover Turkish Cypriots voted in favour of a plan put forward by UN Secretary-General Kofi Annan for the unification of the island whereas Greek Cypriots voted against. This once again would seem to give the Turks the moral advantage. It should not be beyond the wit of European diplomacy to find a solution to this heated but relatively trivial dispute.

Another difficult hurdle Turkey faces is its historic responsibility for the massacre of well over one million Armenians in 1915 during the First World War when the Ottoman Empire then in its last years was engaged in a struggle with the western powers and czarist Russia.

The Turks feared the Armenians were a fifth column allied to . This may go some way to explain although it cannot justify the atrocities the Armenians suffered. Many were slaughtered while hundreds of thousands died when they were mercilessly driven out of Anatolia the remnants of this death march eventually finding refuge in and .

The EU would like to recognise this genocide although it has not made it a specific condition for membership. However on a visit this month to the Armenian capital of 's President Jacques Chirac declared that “ recognises the Armenian genocide”.

When asked whether should do so as a condition for EU membership he replied: “In all honesty I believe so. Any country is enhanced by recognising its dramas and mistakes.” He drew the comparison with which to its credit made amends for the Holocaust.

has proposed setting up a committee of Turkish and Armenian historians which could include historians from other countries to examine the tragic events of 1915. It has committed itself to accept its conclusions and to respond accordingly.

But whether this will be sufficient to persuade a deeply divided Europe to accept as a full member must unfortunately remain in doubt.

Patrick Seale is a commentator and author of several books on affairs.