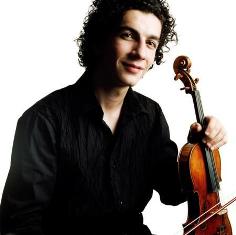 When he?s not tuning high-performance cars, Sergey Khachatryan is turning up the heat in the world?s concert halls. Aline Nassif talks to the Armenian-born violinist about life in the musical fast lane.

Sergey Khachatryan shot to fame when, aged 15, he became the youngest winner in the history of the Jean Sibelius Violin Competition. Five years later, in 2005, he took first prize in the prestigious Queen Elisabeth Competition and joined the ranks of an elite class of violinists including David Oistrakh and Leonid Kogan. Today, the 21-year-old boasts collaborations with top orchestras and such world-class musicians as Kurt Masur, Christoph von Dohn?nyi and Anne-Sophie Mutter. From his home in Frankfurt, Germany, Khachatryan travels the globe performing up to 55 concerts a year. And his prodigious talent is showing no sign of flagging. This month Khachatryan is in recital at London?s Wigmore Hall and makes his New York recital debut at Carnegie Hall.

What inspired you to study the violin?
Actually,my parents started me on the violin when I was six. There were already three pianists in the house ? my father, who played professionally, my mother and my elder sister ? so they must have thought it was time for a change! Before my eighth birthday, in 1993, we moved to Frankfurt for my father?s work. The economic situation in Armenia was difficult and we had hopes for a better future in Germany. I took private lessons for a year before joining the Wurzburg Hochschule under Grigori Zhislin, but in 1996 I settled with Josef Rissin, who I can honestly say made me a real violinist. Rissin had developed his own method, which combined different schools including those of his own teacher Boris Belenky and Germany?s Carl Flesch.

Do you have any role models or musical idols?
Role models, yes, and in particular my father who is a wonderfully sensitive musician and has been like a second teacher to me. But I have never had a musical idol, because that to me means wanting to follow in that person?s steps which I find too limiting. If I have an idol, it is the music, because that alone keeps me working hard and gives me the impulse to live.

Competitions have played a significant role in your career.Would you say they are important vehicles for young violinists who want to succeed?
Yes, providing you can cope with the pressure. Competitions are not necessarily great for your inner musical development, but they are excellent for training and stamina ? you will never prepare yourself better. In my case, winning the Sibelius Competition also gave me a name. But I decided the Queen Elisabeth Competition would be my last, as I wanted to start working on myself, on what?s inside.

Even better, competitions have rewarded you with priceless trophies ? the Guadagnini for the Sibelius and, more recently, the 1708 ?Huggins? Stradivari following the Queen Elisabeth. How do they compare?
I don?t usually go for Stradivaris because I prefer the smooth, dark sound of a Guarneri ?del Ges??, but the ?Huggins? is a wonderful instrument ? it gives me more possibilities than the Guadagnini and has helped develop my ear. Some violinists don?t like Stradivaris because they say a Stradivari tells you how to play, but I have a very good relationship with mine. Anyway, I believe a professional musician makes an instrument their own, and plays what they hear within. A great violin does not create a great musician ? but if you pay close attention, it creates greater possibilities.

What is your practice routine?
It depends on the occasion and how well I know the repertoire. Earlier this year I had to perform Prokofiev?s Second Concerto for the first time, so I practised six hours every day for a month. However, for the Queen Elisabeth Competition I worked every waking hour because I wanted so badly to win. I don?t practise scales and studies. I prefer to work directly from the piece and tackle difficult passages as they come. I also find research very rewarding ? in particular discovering more about the composer through books and scores. Practice should always be tailored to the individual; there can be no one way. But I would recommend that everyone makes contact with their instrument each day. Always speak to your violin otherwise he will get angry.

Who are your favourite composers?
Shostakovich and Beethoven, for very different reasons. Shostakovich?s music touches my soul as an Armenian, whose ancestors have suffered so much tragedy and whose people are deeply melancholic to this day. I love Beethoven because he expresses something loftier than human emotions ? his music is like a religion to me.

Having achieved so much in such a short time, do you ever worry about what the future holds?
No, because I am sure I?ll continue the way I started, staying true to the music every step of the way. I?ve worked hard to be where I am now.Nothing came by fluke. Even though the Sibelius Competition gave me a boost, I can?t say it was the big breakthrough ? I had been steadily working to that point anyway. Everything I have achieved is real and hard-earned which is why I am confident about my future.

Where do you see yourself in ten years?
Performing on stage, as I do today. There are musicians who say their dream is to play in Carnegie Hall or with the Berlin Philharmonic, but I simply accept that those things will happen. My real ambition is to be with the music and on stage where I can express my feelings. I will never come to a point where I say I can?t do better or I can?t go further ? that, to me, is the death of any artist. Music is an expression of life, and for as long as I live and evolve, so will my music.

Do you suffer from stage fright?
Not in the conventional sense, because I don?t fear the stage. But I do worry that all the ideas I have for a piece of music will not come off during my performance. So the more time I spend preparing a piece ? and the more ideas I have to share ? the more nervous I get.

What do you say to people who criticise young musicians who take on intellectually advanced pieces?
When you have such strong feelings about a piece I believe you have to play it. Besides, today I will interpret a piece one way, and in 20 years I will interpret it differently. There is no such thing as the definitive performance, which is one of the interesting things about our profession. Age should not be a barrier if your heart is sincere.

Is the pursuit of originality to further your career overrated?
Being original for its own sake is one of the biggest mistakes a musician can make.You cannot fool anyone by pretending to be something you?re not. Different is good, but there are too many violinists who put it on. If originality doesn?t come naturally, from within, you insult the music. This is the reason why I would never branch into pop genres. Pop is something that is created to move to, not something for your soul. When I see today?s focus on appearance at the expense of classical music, sometimes I feel I was born too late. I long for the serious attitude of the older generation, like Oistrakh and Heifetz.

Do you ever regret missing out on a normal life?
No, because I had a normal childhood and I can?t imagine a better and more fulfilling career. I made my own choices, developed at my own pace, and I?ve loved every minute of it. As a child, my parents never isolated me from real life like many do because they mistakenly imagine that if they let their children play in the streets they will lose their talent. I went to a regular school until I was 18 and my biggest hobby, car tuning, has nothing to do with music. I love fast cars ? I have an Audi S4 V8 and go-cart whenever possible. I also play table tennis well and enjoy painting. The travel gets tiring at times, but name me a profession where there?s no pressure and no one gets tired.Yes, of course, romance is difficult unless you have a girlfriend in each city! But I?m still young.

What are the main ingredients for success?
I am here today because I have talent, ambition and I love the violin. I never once doubted or regretted choosing this path. You have to understand that music is not a career where you weigh out whether or not it will work. It is something you do because without it, you cannot survive. Anything less and it won?t work. Perhaps for a short time, but not for always.

Source: Sfz, April 2007 issue. Sfz is a supplement to The Strad ? voice of the string music world since 1890 (www.thestrad.com/sfz)