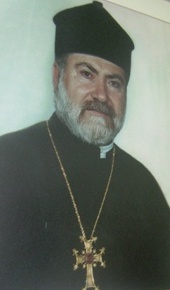 He served the Armenian Community in Kuwait from early 1960s to late 1990s as parish pastor and teacher of “religion” in the Armenian School.

The prelacy library in Salmiya is named after him.

His children and especially Keri Sarkissian are active members of the community.

– Thank God it all started in the middle of summer. The school was closed and the children safe. Maybe only a few thousand Armenians were in Kuwait, and most of them were working men. With the occupation in place, most of them left by road to Baghdad and then on to their home countries.

– A dozen or so Armenian youths maintained a round the clock vigil [in both the School and Church] to keep the looters away. They were not armed except with our prayers. We have invested so much into what we have as a community, and we just could not let go.

– You cannot deprive the Armenians from church and school. Have a look at all the Armenian communities in the world. You get a couple of hundred Armenians together, and the first thing they do is start a school and get a priest to conduct Sunday Mass.

– The community was primarily composed of newlyweds, and once their kids got to the age of four or five, these people opened a kindergarten. That was in 1960. I came to Kuwait in 1961, and in the years that followed both our school and church grew into full-fledged and self-sustaining institutions.

– We used to hold Mass in an apartment, then one year we pitched a tent in the courtyard of the Armenian school to commemorate St. Vartan. We have come a long way since then.