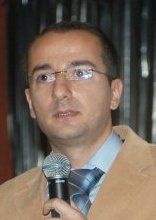 He was an editor of the Lebanese-Armenian Aztag Daily from 2000 to 2007, when he moved to Boston and became the editor of the Armenian Weekly.

His articles, interviews and poems have appeared in many publications worldwide.

Many of his writings have been translated into more than 10 languages.

He contributes regularly to a number of U.S. and European publications.

He has lectured extensively and participated in conferences in Armenia, Turkey, Cyprus, Lebanon, Syria, Austria, Switzerland and the U.S.

He has presented papers on genocide and the media at several academic conferences such as the 5th and 6th Workshops on Armenian-Turkish Scholarship, held at NYU in 2006 and at the Graduate Institute in Geneva in 2008.

He is a member of the International Association of Genocide Scholars (IAGS).

His translations include Paulo Coelho's “The Alchemist” published by Hamazkayin in 2004. The book was launched in Yerevan, Armenia in the presence of Coelho and Mouradian.
He can be contacted at [email protected] or on facebook: http://www.facebook.com/profile.php?id=726305385